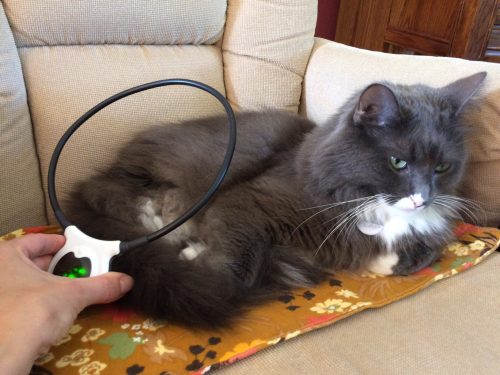 Lisa Turner adopted 8-year-old Hubble earlier this summer. Hubble is a tripod. He had hiis right hind leg amputated as a kitten after it was crushed, most likely by a car. Hubble gets around quite well on three legs, but hopping around on his remaining back leg puts a lot of asymmetric strain on his back. As a result, he has pain in his lower back that he just learned to accept.

Lisa had used the Assisi Loop for her cat Angus, who passed away earlier this year, for the last year or two of his life. “I didn’t want to give him any type of anti inflammatory medicine that would destroy his organs,” said Lisa. The Loop helped with his arthritis and IBD. Angus also received chiropractic, laser, and acupuncture therapy every two months for many years. “These therapies combined extended his quality of life immensely,” said Lisa.

Because the Loop had helped Angus so much, Lisa knew she wanted to use it with Hubble as well. In addition to the Loop, Hubble is receiving acupuncture, chiropractic and laser therapy about once every 2-3 months.

Getting Hubble used to the Loop was a work in progress. “The first time, he would not let me touch him with it,” said Lisa. “I had to find a time when he was in a really good nap and hold it a few inches away. He got up after about five minutes so I stopped. During the next 2 or 3 treatments, he let me do an entire session, as long as I held it a few inches away.” Eventually, Lisa was able to touch Hubble with the Loop. “I use the Loop on Hubble about once a week,” says Lisa. “He doesn’t nap much when we are home on weekday evenings, and his sessions are more successful when he is sleeping, so, it’s easier to make this happen on weekends.” Lisa is using the Loop primarily for maintenance and prevention, hoping to put off the inevitable arthritis and related pain he is more susceptible to as a tripod for as long as possible.

“He’s so different from Angus,” said Lisa. “Right from the start, I could lay the Loop on Angus and walk away. He wouldn’t move or flinch for the entire session. So every cat is different!”

Coming November 30:
Our last Assisi Loop giveaway of the year!