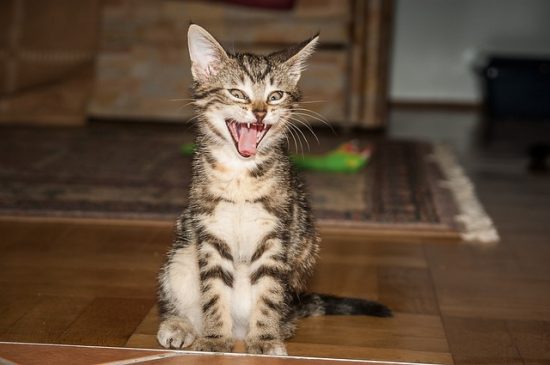 One of the primary ways cats communicate is through body language, but they also express themselves vocally. Cats have a wide range of vocal expressions, and “meow” is only one of them.

The “meow” sound is usually used as an alert sound. Kittens meow more frequently than adult cats. The soft “mew” sound is used by kittens to alert the mother that they need attention. “Meow” is also used to communicate with people. It can mean “pet me,” “feed me,” or just “pay attention to me.” Most cat guardians eventually learn to distinguish the meaning of the various “meow” sounds their cats make.

Even though cats do purr when they’re content, purring can also be a sign of stress. Cats also purr when frightened or injured. In these situations, purring appears to function as a self-soothing mechanism. Researchers found that the frequency of a cat’s purr occurs at the same frequencies that aid in bone growth and fracture healing, wound healing and pain relief. It appears that with the purr, nature has provided cats with a built-in self-healing mechanism.

Cats use a chirping sound, similar to a “brrp,” which falls somewhere between a meow and a purr, to greet each other and humans. The sound is quite endearing.

Cats make a chattering noise when they’re watching birds or squirrels outside a window. The origin of this noise is not clear, and may communicate either excitement or frustration.

Growling is a warning sound. Cats will growl at each other or at humans as a warning to back off.

Cats hiss when they’re angry or scared. Hissing is sometimes preceded by a growl, and is considered an escalation over the growl.

Yowling, wailing or screaming are usually precursors to aggression. These vocalizations are usually the final warning before a fight begins, and can also be heard during a fight. Rarely does screaming indicate pain, as cats tend to not vocalize when they’re in pain.

While all cats share basic vocal expressions, they can also be individualized. Once you get to know your cat, you will most likely gain a thorough understanding of her unique communication style.

11 Comments on Cat Sounds: What Do Your Cat’s Vocal Expressions Mean?