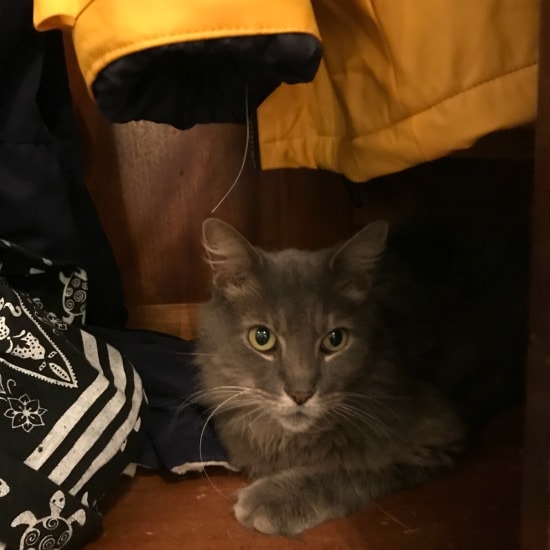 When Bernadette stopped at the Ormond Beach, FL pet supermarket on Labor Day weekend to stock up on food for 15-year-old Lucy to prepare for Hurricane Irma, she certainly did not expect to come home with another cat. She and Lucy were still mourning the loss of Diz, who died suddenly a month ago, just three days before his 18th birthday. But, as she does at every visit to the pet supermarket, Bernadette stopped to visit the rescue cats at the store. That weekend, the Halifax Humane Society had doubled up the cages in anticipation of the storm.

When Bruce, a beautiful grey and white kitty, wandered over to Bernadette, she scratched him behind the ears while the store manager told her what she knew of Bruce’s story. He was given up by his original owner, was adopted into a home with children, but was eventually returned because he supposedly did not get along with the kids. He had had hernia surgery at some point, he was skinny because he wasn’t eating enough, and he had been declawed. The store manager was extremely worried about Bruce and all the cats at the store and the shelter.

“I said I could not even think about taking him because I had just lost Diz,” said Bernadette. ” I still had a heavy heart, and I was still worried about Lucy.” Lucy took the loss of Diz hard, and stopped eating for a while. She was finally starting to do better. “And,” said Bernadette, “we were evacuating the area for the hurricane. On Labor Day, I had made hotel reservations as close to Atlanta as I could get, which was already very difficult.”

On Tuesday, Bernadette read in a local paper that the shelter was packed to capacity and looking for people to adopt or foster cats. “I called the humane society and told them that I might be able to foster Bruce and at least get him out of the storm’s way,” said Bernadette. “We agreed on 30 days. I filled out all the paperwork and picked up Bruce late on Tuesday so that he could at least get used to me before we had to evacuate.” Bernadette’s intention was to find him a good home or to bring him back to to the humane society or the pet store after the storm. 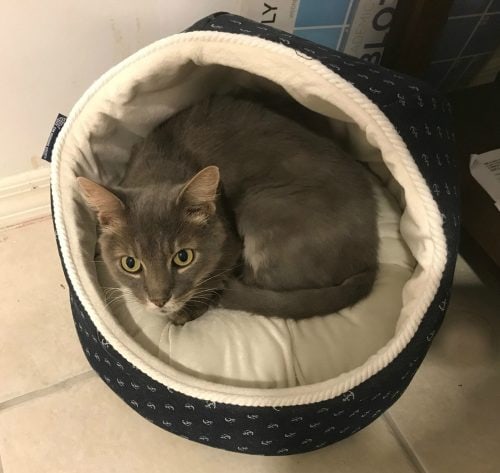 Bruce camped out in the kitchen and adjacent garage while Lucy had the rest of the house. “She was still clinging to me,” said Bernadette. “I watched the Jackson Galaxy YouTube video on how to introduce adult cats by first putting their food on each side of a closed door.” Bruce escaped the kitchen a few times and there was a lot of hissing and growling, but only one minor fight. On Thursday, Bernadette opened the kitchen door part way and inserted a pet gate. There was still some hissing and growling. “Bruce was eating like a piglet,” said Bernadette. Unfortunately, Lucy was still just nibbling.

On Friday, Bernadette packed the car with clothes and supplies for 10 days on the road. She wanted to be prepared for the worst. “Traffic on 95 was a nightmare,” said Bernadette. She ended up taking back roads to their first stop, a motel in the small Georgia town of Douglas. “Bruce meowed a lot of the way,” laughs Bernadette. “I draped his crate with a towel and thankfully, he calmed down.” Lucy is a seasoned road warrior who went back and forth between Virginia and Florida with Bernadette and Diz many times. She just went to sleep as usual.

Bernadette put Bruce in the large separate hotel bathroom and sink vanity area and put up the pet gate, then she let Lucy out in rest of the room. She set up two feeding stations and two litter boxes. “Bruce ate all his food and used his litter box and then jumped over the gate,” said Bernadette. More hissing and growling ensued. “Then Lucy jumped over the gate the other way into Bruce territory, drank from his water bowl, used his litter box and ate some of his dry food, and then jumped back out,” said Bernadette.

Eventually, after picking the cats up and placing them on opposite sides of the gate multiple times, Bernadette just gave up and took down the gate. Lucy slept with her in the bed, and Bruce slept on a chair. Détente was under way. “Then Bruce would plop in my lap and snooze when Lucy was taking a stroll around the room,” said Bernadette. “He is a real sweetheart, but Lucy had him intimidated.” There were periods of “stare downs,” but mostly, Bruce just kept his distance. “It’s like they established a 6 foot rule!”

After two nights they had to pack up again and drive two more hours to Macon, GA. The only reservations they could find were in an Inn dating back to 1842. “Détente held,” said Bernadette. “Bruce moved into the closet/armoire, and Lucy would sit about three feet in front to watch him — until dinnertime, when I put their food dishes right next to each other and they had a fine meal together, after which they went to their separate sides of the room.” That night, Lucy slept on one side next to Bernadette, Bruce slept on the other side. The following morning, they touched noses. 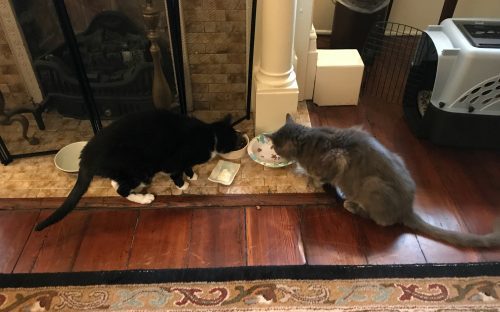 On Tuesday, five days after leaving Ormond Beach, Bernadette got word that the power was back on at her house, and there was no damage, so she packed up and started the drive home. “Bruce figured out how to unzip the zipper and velcro snaps on the soft carrier,” said Bernadette. When she put him in the hard carrier, he would not stop yowling, so eventually, she just put up the pet gate to keep him in the back of the car for part of the drive home, but put him back in the hard carrier once they reached the high speed interstate. Lucy was happy to say in the soft carrier and either looked out the window or slept. Both cats were exhausted when they arrived at home, “Bruce from yowling, and Lucy probably from listening to Bruce!”

As you probably guessed by now, Bruce did not return to the humane society. “He and Lucy have continued their détente,” says Bernadette, “although they are still facing off over who gets to plop in my lap at night.” Bruce is eating well and seems secure now that he knows he will get his next meal, so he does not scarf everything down all at once.

Bernadette certainly didn’t face ideal conditions for introducing a new cat, but perhaps, it takes a CATegory 5 Hurricane to speed up cat–to-cat introductions?

Update: Sadly, Lucy passed away in January of 2018.

All photos by Bernadette, used with permission