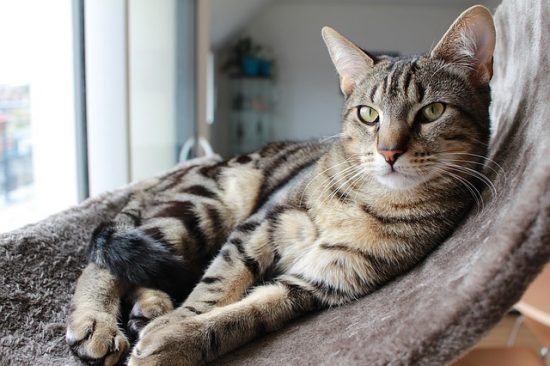 Tabby cats, also referred to as tiger cats, are cats with a coat featuring a pattern of distinctive stripes, lines, dots or swirling patterns. Tabby cats have pencil like lines on their faces, and almost all tabbies have markings shaped like the letter “M” on their foreheads. Tabby is not a breed. The tabby pattern is found in domestic cats as well as many purebred cats. The tabby pattern looks very similar to the coloration of the domestic cat’s ancestor, the African wildcat.

There are several different types of tabby patterns, and tabbies come in colors ranging from grey to brown to orange.

The classic tabby pattern has large blotches and swirls that end in a circular pattern at the sides that almost looks like a bullseye. Classic tabbies are also called “blotched” tabbies.

The mackerel pattern is what most people refer to as “tiger stripes.” The body has narrow stripes running down the sides. They branch out from one stripe along the top of the spine, looking very similar to a fish skeleton, which is how the name “mackerel” came about.

Spotted tabbies feature oval or round spots all over. The spots can be solid or broken. The Bengal pattern is a good example of a spotted tabby.

Ticked tabbies don’t look like tabbies at all at first glancebut a closer look at individual hairs will show that they are striped with light and dark colored bands, also known as agouti hairs. This ticked pattern is most prominently seen in Abyssynian cats, but is also seen in domestic cats.

Cats with random tri-color patches are known as tortoiseshell cats (torties). If the tri-color markings follow any of the tabby patterns such as mackerel, spotted, ticked or classic, they are often referred to as torbies.

Where did the term tabby come from?

The English term “tabby” comes from a translation of the French word “tabis,” which means “a rich striped silk.” The term may also originate from the Arabic “attabiya,” after a neighborhood of Baghdad where such a cloth was first made,

How tabbies got the M on their foreheads

There are several legends about how tabbies got their distinctive forehead markings. The most popular tells us that the baby Jesus was cold in his manger, and Mary asked all the animals to come and keep him warm. The animals all stood as close to the manger as they could, but the baby Jesus was still cold, so a small tabby cat jumped into the manger and curled up next to Jesus. Mary was so grateful that she made the mark of her own initial on the kitty’s head so the world would forever be reminded how a tabby saved Jesus from the cold.

A second legend claims that Mohammed had a tabby named Muezza who once save his life by slaying a snake that had crawled up his sleeve. When it was time to attend prayer, the cat had fallen asleep on the sleeve. Rather than disturbing the sleeping cat, Mohammed cut the sleeve off his garment. From that day on, all tabbies were born with an M on their foreheads to remind the world that Mohammed loved cats.

Tabbies have a reputation for being laid back, calm and more sociable. They’re also said to be very affectionate, and relaxed to the point of being lazy.

This article was previously published on Answers.com with the title “The Fabulous Tabby Cat” and is republished with permission.

13 Comments on The Terrific Tabby Cat