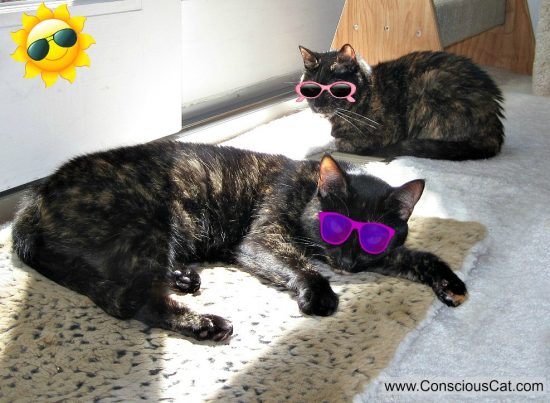 On Monday, August 21, 2017, a total solar eclipse will be visible in totality within a band across the entire contiguous United States. And while there are some things you’ll need to do to prepare if you want to watch the eclipse, even if you’re not in the area of totality, there are a lot of things you don’t need to worry about, and that includes your cats.

How does the solar eclipse affect animals?

According to Mother Nature Network, wildlife will be far more affected by the eclipse than cats (and dogs.) Many wild animals may mistake solar eclipses for twilight. Crickets and frogs may jump start their evening chorus, diurnal animals might quiet down and even nocturnal animals like bats and owls might be lured into activity in the eclipse’s totality.

Cats may be be confused by the eclipse, or in some cases, even anxious, especially if you live in the band of totality, but probably far less than would be the case during fireworks or a thunderstorm. The eclipse is silent, and totality only lasts a few minutes at the most.

Most likely, your cats will just be going about their normal business that day, eating, playing and napping like they do every other day. “I have no recollection of anyone ever telling me that an eclipse affected their cat,” says Andrea Tasi, VMD, a holistic veterinarian and owner of Just Cats Naturally.

“While there are plenty of anecdotal accounts of all sorts of animal responses written about over the years, there’s no science on it that I can find,” says Fern Slack, DVM, a feline veterinarian and owner of Uniquely Cats Veterinary Center in Boulder, CO. “I can’t imagine that it will be much different for a domestic cat than being indoors on a rainy day, or in a room with the lights off.”

Will your cats need protective glasses?

If you’re going to watch the eclipse, you know by now that you shouldn’t ever look directly into the sun, even during partial eclipse. So should your cats wear protective glasses during the eclipse? While cats eyes can theoretically be damaged just like human eyes if they look directly at an eclipse, cats don’t look directly at the sun  – and it’s not like they’ll be tempted to do so on August 21, since unlike humans, they don’t know there will be an eclipse. “On a normal day, your pets don’t try to look at the sun, and therefore don’t damage their eyes. And on this day, they’re not going to do it, either,” Angela Speck, director of astronomy and a professor of astrophysics at the University of Missouri, said at a news conference with NASA on June 21 in Washington, D.C.

So rather than worrying about your cats, enjoy this rare event, and spend a moment on August 21 being grateful that of all the billions of planets in the universe, you get to live on this one.

11 Comments on Will the Solar Eclipse Affect Your Cat?