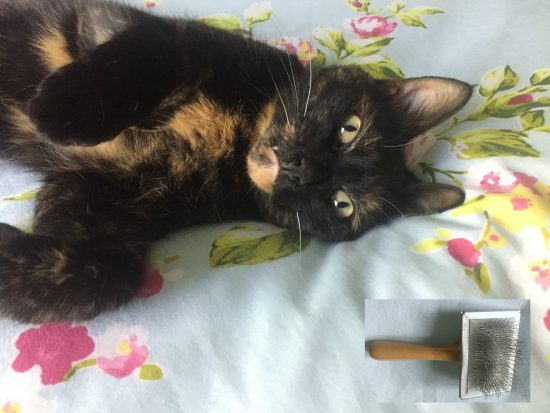 Hi everyone! It’s Allegra! It’s been too long since I got to write anything here! The other day, when Mom was brushing me, she said “Allegra, you’re so cute when you’re being brushed,” I thought maybe I should tell you about our “brushies routine.” I don’t know about being cute, but I do love being brushed. Mom brushes me every day at lunch time. When she gets out of her office chair and walks toward the kitchen, I know it’s time!

I get so excited when she grabs the brush off the kitchen counter, I always let her know how much I’m looking forward to being brushed. I don’t usually talk much, but I want to make sure she knows that being brushed is one of my favorite things.

Mom uses an old slicker brush that she says has been used on every cat she ever had, starting with her first cat, Feebee. The bristles are a bit bent, but that doesn’t bother me at all. It feels soooooo good to be brushed! Mom bought a new slicker brush for me a while back, but I didn’t like it at all, so she went back to our old trusty one.

The other day I suggested that Mom grab her phone and take some video of me being brushed. You’ll have to excuse the not so great quality. Mom said it was a little challenging to hold the phone with one hand and brush me with the other, but I think you get the idea of just how much I love being brushed.

Ruby doesn’t like being brushed as much as I do, but some days, she just can’t stand to be left out, so she’ll wander over and stare at me and Mom. Mom always makes sure I had enough brushing before she moves on to Ruby.

What about your kitties? Do they like being brushed?

17 Comments on Allegra and the Slicker Brush