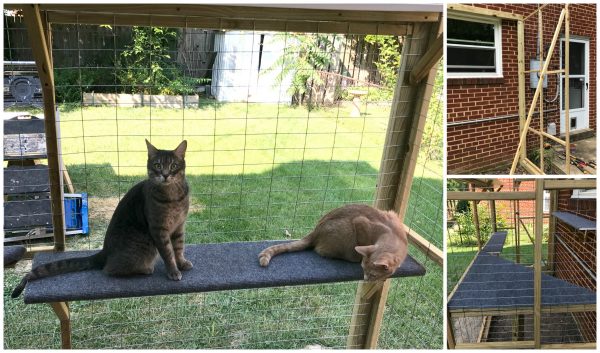 I decided to build a catio to give my cats more space so that they can get away from each other and have some down time. I’ve always known that they would very much like to go outside, but I never had the nerve to do it. I always felt that keeping them inside was the one selfish decision I made. I knew that they would have happier lives if I let them go out – I just could never bring myself to do it.

Last year, I adopted a very spunky female cat who sits by the open windows all day. She clearly wanted to go outside. That was the final push that made me decide to actually build a catio versus just thinking about it. 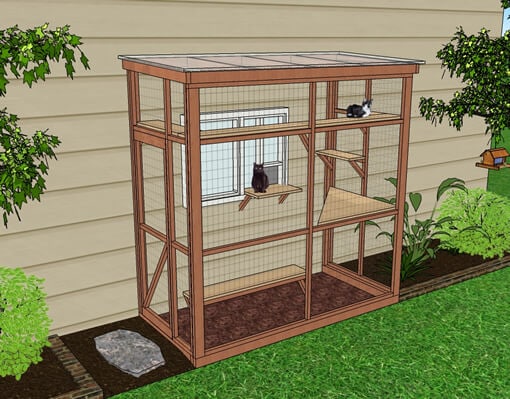 I bought the plan for the 4×8 foot Haven™ catio from Catio Spaces. I followed the plan probably about 95%. I did modify the shelves a little. The only critique I have of the plan is that not all the materials they want you to use were available at my local Home Depot or Lowe’s, so I had to make changes to deal with that. The plans call for using cedar planks for the shelves, but no one had the right size, and I didn’t want to have to go to a specialized lumber store for that. 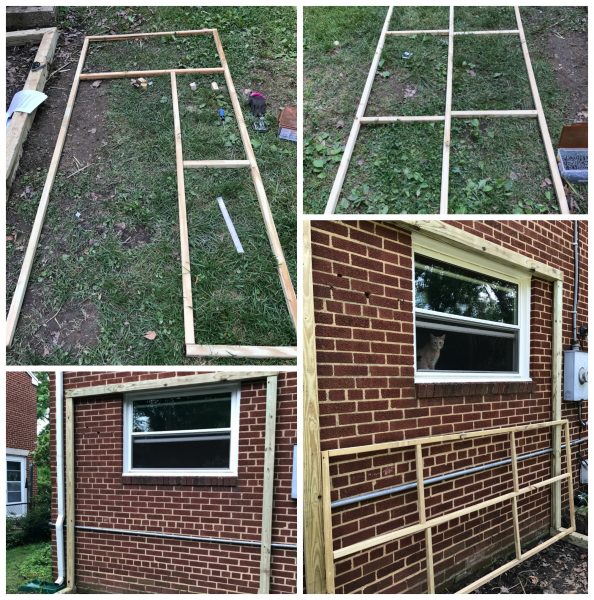 The biggest challenge for me was that I found that it is simply not a project that a person can do alone. I had to recruit some help. We were moderately handy, certainly not wood working gods, but good enough to know how read the plans and understand them, and how to handle a circular saw. I did have to make some small modifications because of my house, and that did lead to some issues later on. For example, I had to build the catio further off the house than the plans say. My house is really old and has some electrical conduits attached to the outside of the house for my AC unit. We had to build around this metal tubing, which, of course, was completely in the way. But even with these few problems, I was able to make it work. 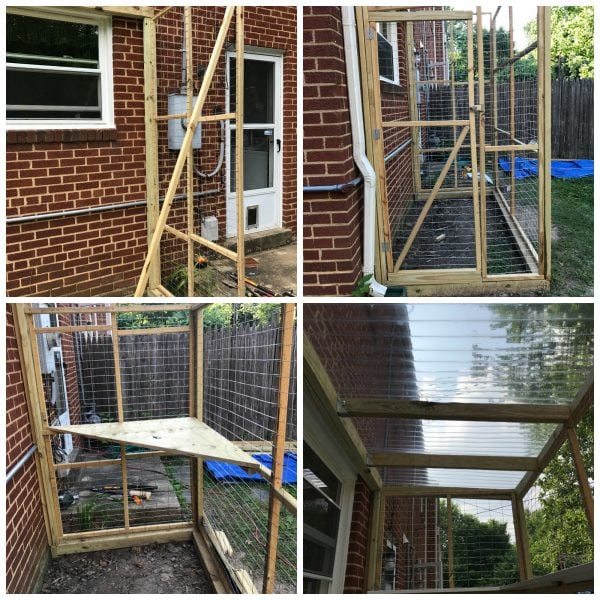 I considered using screening, but I think that would have just been too expensive, and would also have limited their view of the outside. So I just used wire mesh to cover the catio, although not chicken wire. The chicken wire seemed too thin and not strong enough to keep a determined cats in. I have a perfect kitchen window that I just have to open for them to go in and out. The catio covers the whole window just right. And even without screening, and with the window open almost all day, the bugs that have gotten inside have been really minimal.

I was also going to put some grass on the ground for them but it was the wrong time of year to buy sod. Currently they just have mulch, but once it gets cooler I plan on adding the sod. I think feeling grass in their toes is an experience I want them to have.

One thing I was worried about with my cats having access to the outdoors was fleas. So far, I have not started them on any type of preventative. I’m going to wait and see what happens. I’ve been flea combing them every other day, and so far so good.

The bottom line is: they love their catio! They have spent lots of time out there. Just last night, they were playing and chasing each other around the shelves. My youngest is around 4 months old and already enjoys going outside. The kitty who loves it the best is Starbuck. Once it hits 5 pm, she spends the whole evening outside. Watching the birds, napping, and grooming herself. By 10ish I have to bribe her with treats to get her back inside for bedtime. The only one who is not really impressed at all is my oldest kitty. He’s 17 and has not gone out there yet.

I’m not embarrassed to admit I hovered like a helicopter parent for the first two days! I was irrationally worried someone would find a way to escape, but now I leave the catio open while I’m at work without any worries. I have been closing it off overnight because of the wildlife in the area.

Jessica Fritschle is the Head of Nursing at the Kingstowne Cat Clinic in Alexandria, VA.

FTC Disclosure: The Conscious Cat is an affiliate partner of Catio Spaces. This means that if you decide to purchase through any of our links, we get a small commission. We only spread the word about products and services we’ve either used or would use ourselves.

29 Comments on How to Build a Catio: A Firsthand Account