11-year-oid Josh was rescued from a city shelter, where he was brought by a good samaritan, by Best Friends LA. He most likely lived his entire life on the streets, as he was in extremely poor health. His fur was filthy and matted due to lack of grooming, and he was underweight. Josh had a multitude of health issues: chronic renal failure, severe dental disease with resorptive lesions, a heart murmur, muscle atrophy related to his kidney disease, and weakness and lameness, especially on his left front leg, which slid out from under him when he was walking. Josh is FIV positive.

Josh had dental surgery with multiple extractions in January. While anesthesia is certainly risky for a cat with his multiple health issues, not addressing his dental pain would have greatly diminished his quality of life. Other treatments included Adequan injections once a month, Cosequin in his food twice a day, and subcutaneous fluids every other day.

“Josh was brighter, and had more energy immediately after Adequan injections,” said Samantha, “but the effects are not noticeable more than a day or two after treatments.” Samantha decided to try the Assisi Loop. 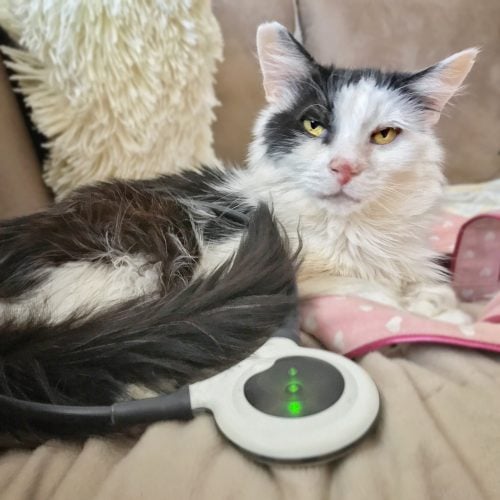 “Josh was noticeably stronger and brighter after seven weeks of Assisi Loop treatments,” says Samantha. “He seemed very relaxed during the Loop treatments, too; he would fall asleep every time.” Josh groomed himself for the first time after his first Assisi Loop treatment (“it was amazing,” says Samantha,) and continues to groom his legs after treatments. Josh now walks faster and with less difficulty. He can now jump on the sofa and the bed on his own with no issues. Josh has even started running and chasing his foster brothers! 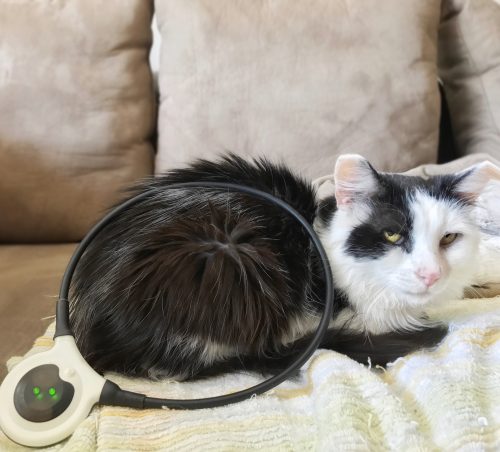 Another testament to how much better Josh is feeling is that his confidence in social interactions has increased. “He used to cower when the other cats would approach him,” says Samantha. “Now he stands tall and plays with them.” His front left leg no longer slides out from under him.

“And his appetite has increased!” adds Samantha. Josh’s weight increased from 6.4 lbs in January to 7.5 pounds the beginning of June. “We have seen so many positive results from Josh’s Assisi Loop treatments,” says Samantha.

You can watch Josh’s dramatic improvements in the video below:

Coming July 13:
We’re giving away an Assisi Loop to one lucky reader!