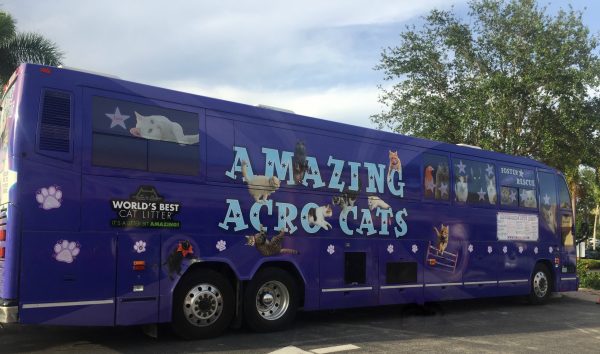 I first met Samantha Martin two years ago, when she came through the Washington DC area with her Amazing Acro-Cats. I had been skeptical then. I’m well aware of the controversy that surrounds circus performances, but after talking to Samantha for almost an hour and watching her with her cats, I was able to put any misgivings aside. From the moment I met Samantha, I knew that I had encountered a kindred spirit. Samantha is passionate about cats and their well-being. She knew from the time that she was ten years old that she wanted to work with animals. A renowned animal trainer with a degree in animal husbandry and studies in animal behavioral sciences, Samantha has worked with all sorts of animals, from rats to chickens to groundhogs.

The Acro-Cats’ hour long show features over a dozen beautiful rescue cats who perform tricks ranging from walking on tightropes and balls to jumping through hoops to bowling and ringing bells, and ends with a rousing performance of the only feline rock band in the world, The Rock Cats.

I was in South Florida for a brief vacation two weeks ago, and my stay just happened to coincide with the Acro-Cats’ Lake Park, FL performance. It was wonderful to get a chance to catch up with Samantha, and very exciting to see the Acro-Cats’ new tour bus. When I last saw them, they were making do with a 1963 General Motors bus that broke down more often than it ran. After a successful Kickstarter campaign, Samantha was able to purchase a bus that was previously used by a touring rock band, and had it retrofitted to suit her needs. 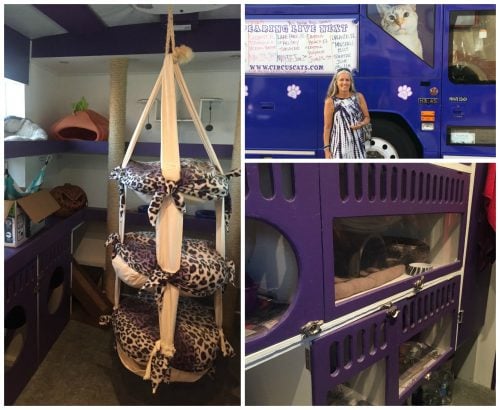 The bus features comfortable cat condos, sleeping bunks for the humans, a small kitchen, a shower, and even a playroom for the cats. It also features an incubator which gets plenty of use whenever Samantha rescues orphaned kittens. Since 2009, Samantha has found homes for more than 200 cats. She works with rescue groups across the country by taking adoptable kittens on the road. Since the Acro-Cats are in the same town for a few days, there are no same-day adoptions, and potential adopters are thoroughly screened by the local rescue before they get to take a kitten home. Living with this many cats in a small space can be challenging, but at the end of the day, Samantha wouldn’t trade her touring life for anything. “I wake up covered in cats every day,” says Samantha. “How much better does it get?” 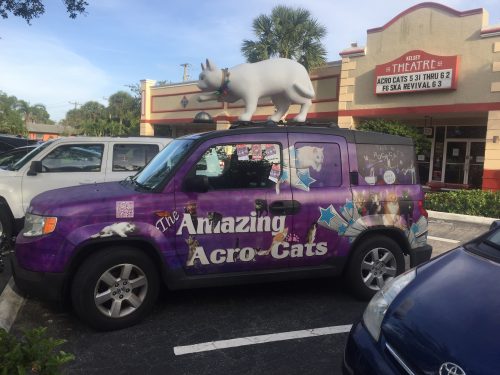 Earlier this year, Tuna, the star of the show, passed away at the age of 15 from an aggressive form of cancer. Samantha was heartbroken. Tuna was an icon, and she left some mighty big paws to fill – so big, in fact, that it takes three young cats to do the job. Ahi Tuna, Albacore Tuna and Big Eye Tuna are eager to learn the ropes, and while nothing will ever quite fill the hole in Samantha’s heart, she clearly loves these three young cats already. 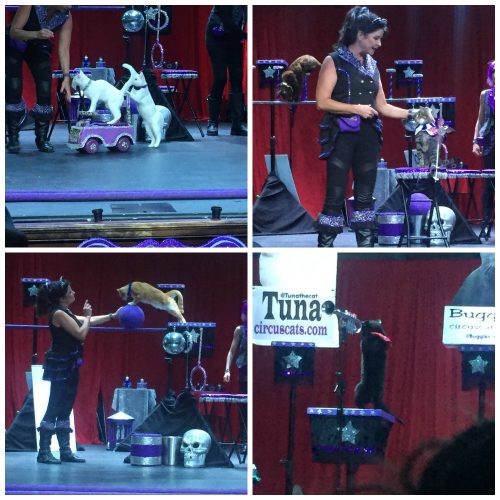 The show is a wonderful blend of entertainment and education: Samantha’s desire to educate others on how training can enhance the bond between cats and humans and solve behavior problems drives everything she does. All of the cats are clearly having fun. Each cat had his or her tail straight up in the air running from and to the carriers they stay in on the side of the stage as they were called on to perform. They may not always perform on cue, but their reluctance to do some of the tricks only makes the show more endearing. A couple of the cats decided to take a walk around the theater rather than perform. One returned to the stage with several dollar bills tucked under his collar! 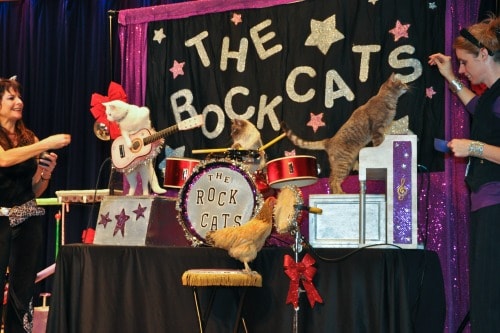 The show ended with a rousing performance by the Rock Cats with special guest Cluck Norris, the chicken. After the show, Samantha invites the audience up on the stage to meet the cats and to take pictures. I found it impressive that the cats remained completely calm, even with all of these strangers around them.

The performance once again completely captured my heart. I experienced something I can only describe as pure joy, watching these cats do something they truly seemed to love.

Samantha and the Amazing Acro-Cats are currently on tour. Visit http://www.circuscats.com for tour schedules and more information.