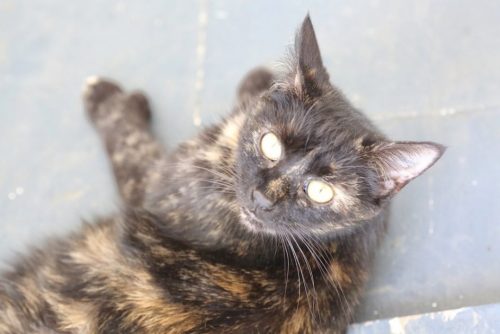 When a Cambridge, New York man found a stray tortoiseshell cat on the street, he took her in, then realized that she had had kittens under his porch. While he was on the way to the vet with her, he stopped for coffee, and she got out of his car. He was unable to catch her. But this tortie was on a mission: she made her way to the Mansion, a nearby assisted care facility. It soon became clear that she wanted to live there.

I first came across this story a couple of weeks ago on Bedlam Farm, a blog written by Jon Katz, who I’ve been following for many years. Since then, Summer, as the Mansion staff named her, has firmly established herself as self-appointed therapy cat at the facility. At first, she was happy roaming the Mansion’s grounds, and she’d sometimes sneak into the house at night. Occasionally, she appeared on a sofa where the residents were sitting, or on a porch chair outside. 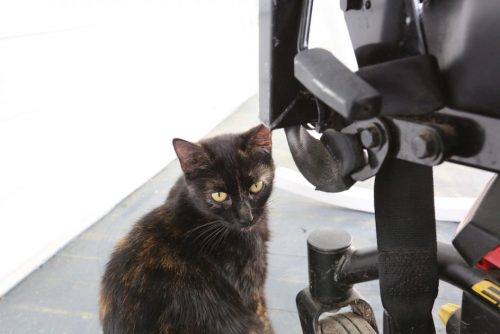 Mansion staff wanted Summer to stay, but one of the residents is allergic to cats. The staff checked with doctors and were given the green light, telling them it would be safe if they brushed Summer frequently and vacuumed thoroughly and often, but the allergic resident would have to agree.

Jon Katz raised money on his blog to send Summer to the vet for a thorough check up and to get her spayed and vaccinated. A month later, “the doctors have all cleared her for admission, the vet has checked her for ticks and fleas and taken her blood and will spay her shortly, the one resident who wasn’t sure about his cat allergies has agreed to give her a chance,” wrote Katz, who visits the Mansion frequently with his Border Collie therapy dog Red. 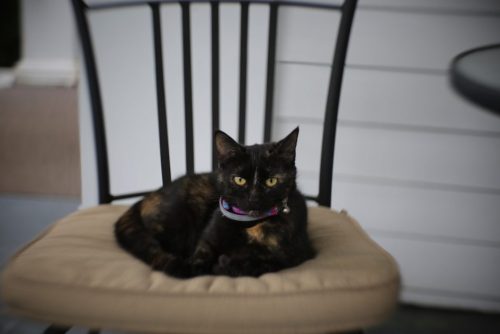 It seems that Summer has found her calling and is quickly becoming the queen of the Mansion.  “She is much loved by the residents, who are thrilled that three animals have come into their life – Summer, Red and soon, Leroy, hopefully my next therapy dog,” wrote Katz. The one resident who was concerned about allergies has agreed to let Summer come inside, and so far, he’s doing fine.

Jon Katz is the author of several books about animals, and shares his Bedlam Farm animal experiences through blogging, videos and writing at http://www.bedlamfarm.com.