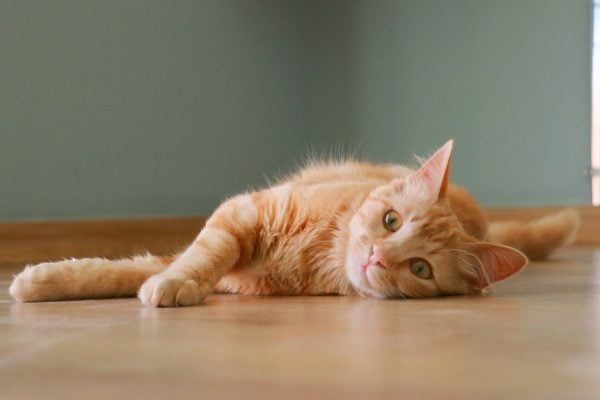 Do you speak cat? Even though cats express themselves vocally, they primarily use their face, tail and body to communicate with each other and with the humans in their lives. Another important way cats communicate is through marking behavior. Understanding this behavior will not only enhance the relationship between you and your cat, it will also help you prevent potential problems in your household, especially when you have multiple cats.

What is the purpose of marking behavior?

A cat’s sense of smell is fourteen times stronger than a human’s. Cats depend on their sense of smell for survival. Scent signals allow them to find food, to determine whether another animal is a friend or an enemy, and to identify their territory. If a cat smells something particularly interesting, you may see her sniffing with her mouth open. This allows the cat to utilize a the vomeronasal or Jacobson’s organ at the roof of their mouth to analyze scent chemicals, also known as pheromones.

Urine marking is unfortunately (at least from a human perspective) the most common form of scent marking. It usually happens in the form of spraying. Cat guardians often confuse urinating and spraying. Urine spraying is a territorial behavior. Cats stand upright and deposit a small amount of urine on vertical surfaces. Cats who are urinating usually squat and deposit larger amounts on horizontal surfaces. Even though both male and female cats spray, the behavior is mostly seen in unneutered male cats, and occurs more often in multicat households, although even a single cat may spray. Spraying is a natural behavior. It is a misconception that cats spray out of spite.

Cats scratch for a variety of reasons: they scratch to groom their claws, the scratching motion helps remove dead sheaths from their front claws (they usually chew them off their back claws). They scratch for exercise; scratching stretches the muscles in the front legs and all along the back. And they scratch simply because it feels good. Cats’ front paws contain scent glands, and scratching leaves behind their unique signature on the object being scratched. The scratched areas serve as territorial markers.

Cats have scent glands on the side of their faces. Rubbing up against an object or a person allows the cat to mark that object or person. It’s a way for the cat to say hello, and to communicate to humans and other animals that the cat wants to bond with them. By rubbing up against you, your cat is essentially marking you as “hers.”

Middening is also known as fecal marking. This lesser known form of marking behavior is more common in outdoor cats, who will defecate in an open area without covering their stool to mark their territory. Even though this behavior is rarer in indoor cats, it does happen.

Kneading, or “making biscuits,” is believed to be a marking behavior that originates in young kittens. By kneading as they nurse, they claim their mother’s nipple as their own.

Inappropriate marking behavior usually manifests as urinating outside the litter box, and while we humans may consider it inappropriate, there’s always a good reason for it from the cat’s perspective. If your cat exhibits unusual marking behavior, or any time you notice a sudden behavior change in your cat, a trip to the veterinarian is in order. Behavior changes can be indicators of a medical problem. Once medical issues have been ruled out, a program of behavioral modification can be implemented.

13 Comments on How Cats Communicate Through Marking Behavior