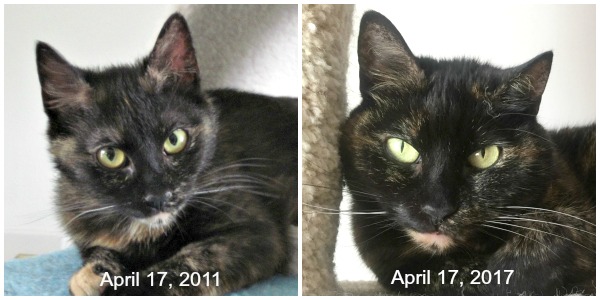 Hi everyone, it’s Ruby! Today is a very important day! It’s my 6h adoption anniversary! Six years ago today, Mom brought me home to live with her and Allegra. What a happy girl I was that day, and I’ve thanked my lucky stars every day since then!

Before Mom adopted me, my name was Cinnamon. Mom liked the name, but she said it wasn’t special enough for me, so she named me after a gem stone!

Ingrid: I know it’s hard to tell in photos, but at seven pounds, Ruby still looks like a kitten to me – and she sure acts like one. It’s hard to believe that she will be seven later this year, and will technically be a senior cat!