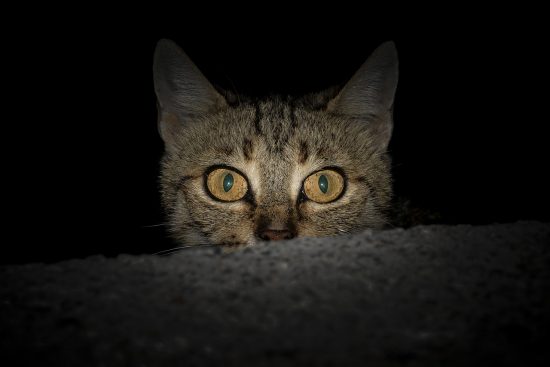 Sometimes a writer needs to go dark. Not as in silent, but as in dangerous. After close to 20 cozies, I realized that’s what I had to do. The cover of my new mystery, As Dark As My Fur, says it all: a black cat stares out, his green-eyed gaze intense. In the background, a tunnel seems to lead the way underground, further from the light. Indeed, this book – the second Blackie and Care mystery – follows a path laid out in the first of this series, The Ninth Life. And while I understand that not all of my readers will want to follow me here, I do hope you’ll listen as I explain why I’m taking it now, in this series. 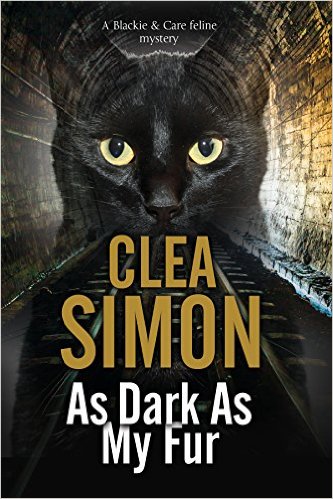 First, let me issue a disclaimer. I still love cats, always will, and while I may put them in frightening situations I will never in any of my books cause any feline serious harm. Even when my fictional cats have crossed the rainbow bridge – as Mr. Grey did before his first adventure, Shades of Grey – they remain benign, if spectral presences in my books, as they do in the lives of those who love them. (Astute readers may notice something similar in the Blackie and Care books.) 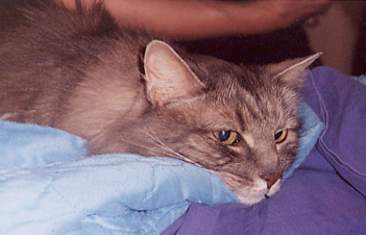 In reality, my mystery cats are in many ways tributes to the felines I have loved. Mr Grey, for example, is drawn directly from my own late, great Cyrus, aka Cyrus T. Cat, Attorney at Law, whose story is also at the heart of my nonfiction book, The Feline Mystique: On the Mysterious Connection Between Women and Cats. (My current companion, Musetta, is the model for both Esmé – also a tuxedo cat – in my Dulcie Schwartz/Mr Grey books and the inspiration for the opinionated tabby Wallis of the Pru Wallis pet noirs.) 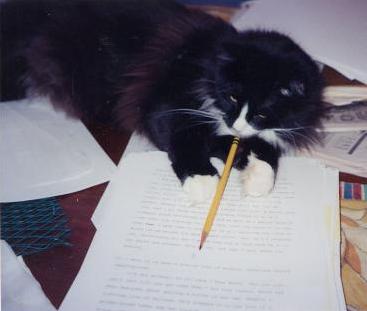 However, I believe all mysteries are at heart quite serious. Even the most casual cozy, after all, deals with crime – and often murder. We read mysteries – and write them – because we have a sense of justice, of rightness and order. We want the good guys to win, and the baddies to be found out and punished. In order to point out the light – to preserve what is right – we need to understand that crime is bad. That it hurts people, and sometimes animals, even if temporarily.

Finally, I want readers to understand that while my Blackie and Care mysteries are darker than my previous cozies (the Theda Krakow, Dulcie Schwartz, or even the somewhat tongue-in-cheek Pru Marlowe pet noirs), they are not horribly bloody and do not dwell on pain or suffering. I just can’t write that kind of book.

That said, these books are somewhat scary, or at least are meant to be. As the series opens, we meet our protagonists – a homeless girl named Care and the black feral cat she names Blackie – who are trying to make their way in an unnamed, dystopian city. (If it helps at all, I was envisioning an updating of Oliver Twist, with a bit of Sherlock Holmes as well – think steam-punk Victorian…).

Care is an orphan and as that first book opens, she is mourning her best friend and mentor, known only as the old man. When she rescues the black cat from a near drowning, he becomes her companion. In The Ninth Life, we learn a lot about how Blackie came into Care’s life. In As Dark As My Fur, we delve back into Care’s life – and solve a mystery or two to boot – as the two companions not only learn more about each other but work to save Care’s foster brother, Tick. Along the way, they deal with drugs, implications of child abuse and rape, prostitution, and extreme poverty. Their world is not pretty.

So why did I want to go there? Why am I now working on the third book of the series (tentatively titled Cross My Path)? The answer is complicated, and maybe not what you think.

To start with, I’ll go back to what I said earlier – I believe that all mysteries are serious. Cozies especially share the values I hold dear: treasuring friendship and warmth, kindness, and the restoration of right after a wrong. But sometimes I feel like the genre can be too cozy. Like, we discover a murdered body, and we don’t appreciate just how awful it is to take a life. And maybe I wanted to stress how bad crime really is. How important it is that all work for – fight for – justice and the rule of law. 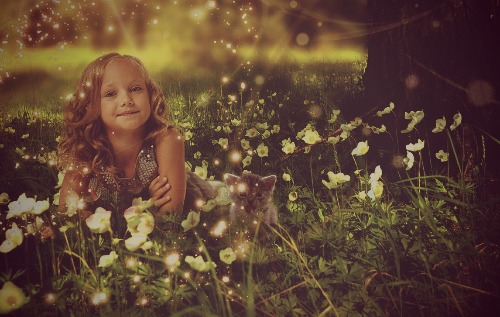 More important, I think, is the fantasy aspect. As a young girl, I often imagined myself alone in the world, except for the companionship of my pets. I would wander off into the woods behind our house and imagine how I would survive, if I had to. Of course, I always made it back for dinner – and I had friends I could share these fantasies with. But there was something fundamentally appealing about them. Maybe it was because the world, to a child, is scary. Maybe it was part of growing up and figuring out how to be a self-sufficient adult. Maybe it was simply because my family life was complicated, and at times I really did feel alone and like nobody understood me, except for my pets.

Maybe sometimes I still feel that way, and I think maybe some of you will too. At least for as long as it takes to read an adventure in which a young girl and her black cat find their way, together.

(NB: I’ve also realized that if I write dark, I then really want to write light! I’m still figuring out the details, but I am hoping to be alternating darker books and much more whimsical cozies soon.) 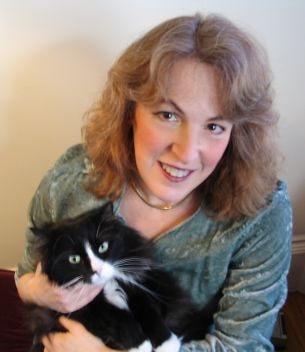 Clea Simon is the author of  more than 20 mysteries and three non-fiction books, including The Feline Mystique – On the Mysterious Connection Between Cats and Their Women. For more information about Clea, please visit her website.

FTC Disclosure: The Conscious Cat is a participant in the Amazon Services LLC Associates Program, an affiliate advertising program designed to provide a means for sites to earn advertising fees by advertising and linking to products on Amazon. This means that if you decide to purchase through any of our links, we get a small commission.

5 Comments on A Cat of a Different Color: When a Cat Writer Goes Dark