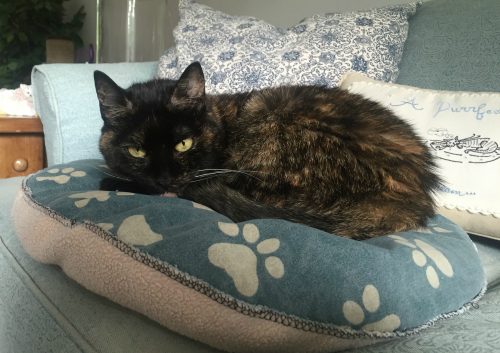 This is the last installment of our four-part series “Ruby Goes to the Dentist,” in which I share my recent experience with Allegra. I’m hoping that it will not only put your mind at ease if you’re faced with a cat who has to have a dental procedure, but that it will also help you ensure that your cat gets the optimal level of care before, during and after her dental work.

If you’ve missed the first part in this series, please read Ruby Goes to the Dentist – Part One: Diagnosis, and Choosing a Veterinary Dentist

If you’ve missed the second part in this series, please read Ruby Goes to the Dentist – Part Two: Preparation

If you’ve missed the third part in this series, please read Ruby Goes to the Dentist – Part Three: Our Day at Animal Dentistry and Oral Surgery

Ruby was quiet on the drive home. Once we got home, I put her into the Reiki room, which I had previously set up for her return with a litter box, bowl of water, and soft bedding. As soon as I opened the carrier, she went from being subdued to being the energizer bunny. She was barely steady on her legs, but she ran around the room, and before I could stop her, she jumped up on the Reiki table!! So much for the part of the discharge instructions that said “don’t let her go up and down stairs, she could fall.”

Once I could be sure that Ruby wouldn’t hurt herself, I left the Reiki room to go check on Allegra, who, of course, had heard us come home. I realized it would be challenging to go in and out of the Reiki room without either Ruby making a run for freedom, or Allegra trying to sneak into the room to check out what was going on behind closed doors. So, for a couple of hours, I juggled putting Allegra into my bedroom and entering and exiting the Reiki room to check on Ruby.

About an hour after we got home, I rubbed Ruby down with her own scent from the socks I had previously set aside. Then I rubbed down Allegra with a towel, and rubbed that towel all over Ruby, so that Allegra’s scent would merge with Ruby’s, creating a familiar “group scent.”

I offered Ruby a small amount of canned food, watered down even more than I usually do (she loves her meals soupy.) She gobbled it right up. I was amazed. If you or I had had all our teeth extracted, I doubt we’d feel like eating an hour after we got home.

After a couple of hours, I realized I couldn’t keep Ruby in the Reiki room any longer. She didn’t settle down at all, just sat and stared at the door. Every time I went in to check on her, she tried to make run through the door. I was worried that not enough time had passed, and that Allegra would react to her strange smell, but I took a deep breath and let her out of the room. Allegra’s ears went back a little when Ruby got close enough for her to smell her, but beyond that, she didn’t react. A couple of times throughout the evening, Allegra hissed at Ruby in passing, but that was all. I was starting to relax a little. I decided to just let this play out, but was ready to separate the girls again if necessary.

How to handle problems between cats following a vet visit

For information on conventional wisdom on how to handle problems between cats after a vet visit, please read read our previous article about non-recognition in cats and how to handle it. I’d also like to share articles by two of our blogging friends who experienced non-recognition with their cats and shared their experiences and tips for dealing with this distressing, but all to common problem.

When Being a Brat is Normal: 7 Tips for Dealing with Displacement Aggression in Cats by Glogirly’s Debbie Glovatsky

Most cats will be subdued following anesthesia, and will sleep a lot more than normal. Some cats, however, have what is called a paradoxical reaction to some of the anesthetic drugs, which can result in excitement, increased movement, restlessness, and increased vocalization. These reactions are rare, but unfortunately, Ruby fell into that category. I don’t think she slept at all the night following her surgery. I checked on her throughout the night, and found her either pacing or crouched in a meatloaf position with her eyes wide open. I was able to get her to calm down for 15 or 20 minutes at a time a couple of times, before she was off pacing again. Thankfully, by morning, she settled down, and after eating a full breakfast without any issues, she finally fell asleep.

Ruby received pain medication and antibiotics for five days following her surgery. The day after surgery, she was a little more quiet than she normally is. Her face was swollen, which I was told to expect. However, she ate well, and readily took her medications. By the second day following the procedure, she was interested in what was going on around her again, looking out the windows, and even racing up and down the cat tree.

I marveled at how quickly she recovered from what had to have been a painful experience. The most dental work I’ve ever had were a few root canals, and crowns, so I (thankfully) have no frame of reference for what having a tooth extracted feels like – let alone an entire mouthful of teeth! I do suspect, however, that if this were to happen to a person, they’d be curled up under the covers in the fetal position for several days.

Dr. Tasi came to our home to recheck Ruby’s mouth last week, three weeks to the day after her procedure, to ensure that everything was healing well. Normally, this recheck would be done at Dr. Chamberlain’s office, but since Ruby gets so stressed being transported, this was a better option for us. Some of the sutures hadn’t dissolved yet (the process can take up to six weeks,) but everything looked good.

I feel bad that I didn’t address Ruby’s dental issues sooner, but I also had to weigh the stress of taking Ruby to the clinic against the benefits of having the procedure done sooner. Could I have saved her from having all of her teeth extracted if I had had this done sooner? Probably. But most likely, because of her resorptive disease, we would have had repeat visits and more extractions at each subsequent visit. There’s no point in playing the “what if” game, or beating myself up. What’s important is that Ruby recovered quickly, and that her mouth feels better. And the good news is that she’ll never need another dental procedure again.

Coming Thursday: Ruby Goes to the Dentist – In Her Own Words

14 Comments on Ruby Goes to the Dentist – Part Four: Returning Home and Recovery