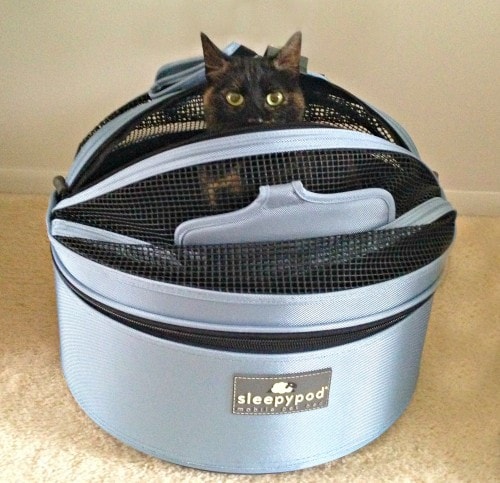 This is the third installment of our four-part series “Ruby Goes to the Dentist,” in which I share my recent experience with Ruby. I’m hoping that it will not only put your mind at ease if you’re faced with a cat who has to have a dental procedure, but that it will also help you ensure that your cat gets the optimal level of care before, during and after her dental work.

If you’ve missed the first part in this series, please read Ruby Goes to the Dentist – Part One: Diagnosis, and Choosing a Veterinary Dentist

If you’ve missed the second part in this series, please read Ruby Goes to the Dentist – Part Two: Preparation

Leaving for the dental clinic

The dreaded day had arrived. I will admit that no matter how much I tried to not feel anxious the day and night before, none of my tried and true techniques for reducing anxiety – meditation, deep breathing, herbal remedies, flower essences – quite did the trick. I did my best to stay as calm as I could.

Ruby was not thrilled that she didn’t get breakfast, but after some fussing, both girls settled into their normal morning routine of napping while I worked for an hour or two, then had breakfast.

I put the carrier in the car, and quickly went back into the house to open my bedroom door. Allegra gave me a curious look, but had already started to settle on my bed for her morning nap.

It’s a 25 minute drive from our house to the dental clinic, and for the first half of it, Ruby cried and cried. I played Through a Cat’s Ear: Music for Calming for her in the car. These recordings, re-orchestrated especially for animals to provide comfort and reduce anxiety, feature soft piano and string versions of classical pieces. The music helped relax me a little, and eventually, Ruby calmed down, too. 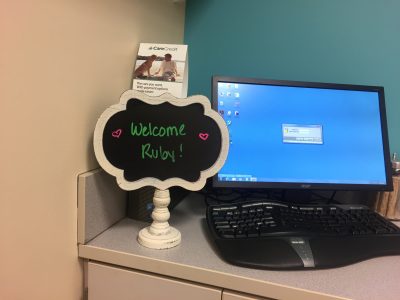 Once we got to the clinic, the receptionist ushered us directly into an exam room, so Ruby wouldn’t be exposed to other animals in the waiting room. I opened the carrier while we were waiting for Dr. Chamberlain. Ruby cautiously peeked out, then climbed on my lap. A few minutes later, Dr. Chamberlain entered the room. Ruby practically flew back into her carrier! I gently lifted her out again, and Dr. Chamberlain examined her mouth, and listened to her heart. He advised me that just on visual exam, he could see several teeth that most likely would need to be extracted. I had expected some extractions, so this did not come as a surprise. Of course, the full extent of what would need to be done wouldn’t be apparent until Ruby was under anesthesia and x-rays of her mouth had been taken.

Ruby would be the second procedure of the day. Thankfully, the clinic had an empty room available where I could sit with her until it was time to induce anesthesia. Ruby sat quietly in her carrier, but I could tell how stressed she was. Every time there was a noise outside the door, she tensed up.

In the past, I was always able to observe my cats during dental procedures, since they were either done at a clinic I worked at, or by a veterinarian who was a friend. While I could have asked, and probably would have been approved, to watch Ruby’s surgery, as with Allegra’s procedure, something told me that it would better for all of us if I was just going to be the worried mom in the waiting room.

After a couple of hours, it was time. Jenn, Dr. Chamberlain’s technician, came out into the waiting room with an update. The x-rays showed that Ruby had multiple resorptive lesions. There was also a lot of damage to other teeth below the gum line, something that hadn’t been evident on a visual exam. Dr. Chamberlain recommended extracting all of Ruby’s teeth.

I had expected multiple extractions, but this came as a shock. Since I completely trust Dr. Chamberlain’s recommendations, I agreed, but it took me a while to wrap my mind around this. Buckley had had all her teeth extracted to treat her severe stomatitis, so I had experience with this. I knew that cats do just fine without teeth, but the thought of your cat having to go through this is pretty brutal even when you know what to expect.

Visual dental exams are not enough to assess dental problems

Unfortunately, this also perfectly illustrates why visual dental exams are not always good enough. Sometimes, as was the case with Ruby, the real damage occurs underneath the gum line. For this reason, I can’t stress enough just how important it is that the practice you choose to have your cat’s dental work done at not only has dental x-ray capabilities, but that the veterinarians also have extensive experience interpreting dental x-rays.

Jenn advised me that it would be at least four or five hours before Ruby could go home. I was worried about Allegra being at home by herself for that long, so rather than sitting in the waiting room at the clinic, I went home.

I shouldn’t have worried. Allegra apparently couldn’t have cared less that her sister wasn’t there! She was totally relaxed and followed her usual routines.

Ruby was under anesthesia for three hours. About an hour after they finished, Lauren, another of Dr. Chamberlain’s technicians, gave me discharge instructions for Ruby. Then she brought a groggy looking Ruby back to me. It was finally time to take my baby home.

20 Comments on Ruby Goes to the Dentist – Part Three: Our Day at Animal Dentistry and Oral Surgery