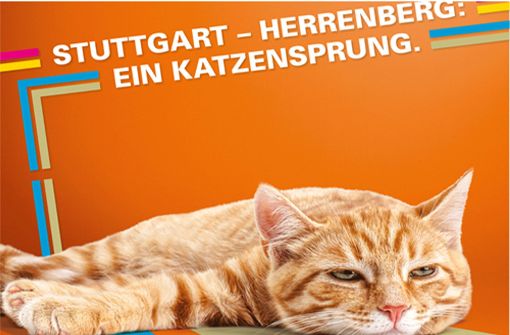 Last week, we told you about Tabby, the orange tabby who took a ride on a German commuter train from the suburb of Herrenberg to the city Stuttgart, which happens to be my hometown. The adventurous kitty with his own Facebook page became so popular that he is now featured in an ad campaign for the city’s transit system. The slogan on the ad loosely translates to “Herrenberg – Stuttgart: a cat’s jump away.” (The German word “Katzensprung” – literally “cat’s jump” – is an idiomatic expression for “a stone’s throw away.”)

If you missed any of the stories featured on the Conscious Cat this week, here’s a recap: on Sunday, we encouraged you to not let fear rule your life, on Monday, we offered health tips for senior cats, on Tuesday, we told you about Almost Invisible Cat Litter, on Wednesday, we introduced our new regular feature, Ask the Vet with Dr. Kris, and on Friday, we celebrated the upcoming one-year anniversary of the publication of Tortitude: The BIG Book of Cats with a BIG Attitude with a giveaway. And don’t forget to enter this week’s other giveaway of a wooden cat tunnel from Happy Little Rascals!

Today’s video features Chroma, the resident kitty at at FOX40 Sacramento, interrupting, I mean, starring, in a weather forecast. I love how the forecaster doesn’t miss a beat.