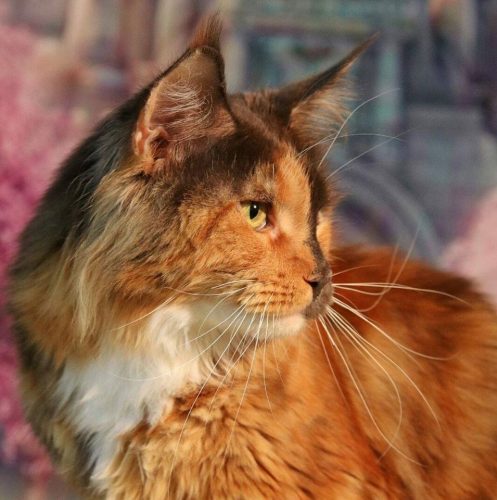 This is not the case with MezzoMixx, a stunningly gorgeous almost 3-year-old Maine Coon. He lives with Carina in the German state of North Rhine Westphalia. Carina breeds and shows Maine Coons because she loves the breed*. All cats are members of the family and have access to all areas of her home. 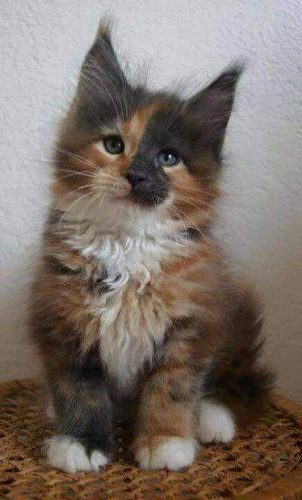 When Mezzomixx, whose full name is “Witches MezzoMixx Fantaghiro of Loveliness,” was four months old, Carina realized that the cat she thought was female turned was actually a male. And while male tortoiseshell cats are usually sterile, MezzoMixx is not. Tests performed at the University of Veterinary Medicine Hanover confirmed that MezzoMixx is a XY/XY chimera. I have to confess that genetics makes my head explode, but Carina provides a detailed information about MezzoMixx’s genetics on her website (you’ll have to run it through Google Translate  and disregard the unfortunate translation of Kater. “Kater” is German for “male cat,” but it’s also the German word for “hangover.”)

MezzoMixx has fathered five litters. “I’m Perfekt,” shown with him above, is his daughter from his most recent litter. “He is so potent that we have problems letting him be with the rest of the cats,” said Carina. “He will recognize a female in heat long before we realize it!” Since he loves his “girls,” he is not very happy when he’s kept separate from the other cats in the home. Carina is considering having him neutered in the next 6 to 12 months. 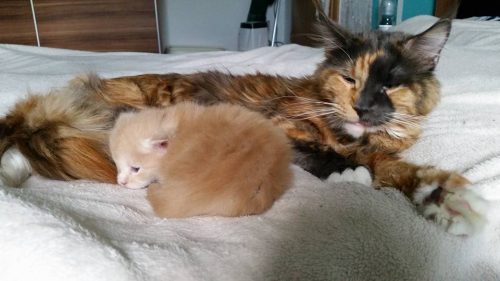 MezzoMixx is a loving father who takes good care of all of his kittens. With his human family members, “he acts like a dog born into a cat’s body,” says Carina. “He greets us at the door when we come home from work, and he immediately wants to be held.” He follows Carina everywhere, and, true to his tortie coloring, he’s a big talker.

He has a mellow temperament. “He would never scratch or bite,” says Carina, “not even when we have to cut a mat out of his fur, or he has to get a bath.” He is a favorite at the vet clinic, where he will march out of his carrier and present himself as the star he knows himself to be. 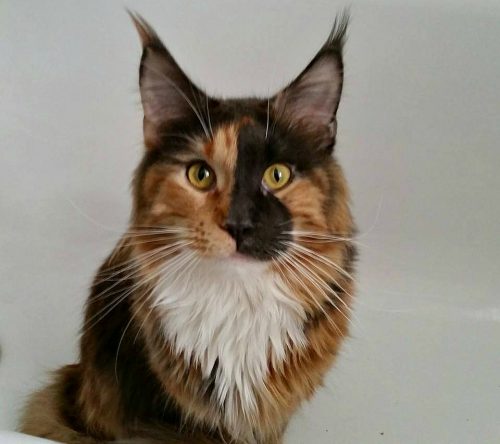 At cat shows, he relaxes in his cage until it’s time for him to be judged, and he shows no signs of stress during the process. “I think he’s an all around perfect cat,” says Carina.

You can learn more about MezzoMixx on his Facebook page.

All photos via MezzoMixx’s Facebook page, used with permission

*Editor’s note: I advocate adopting from a shelter or rescue group rather than purchasing a pedigreed cat, but I respect the love for a particular breed, or special requirements of a breed (such as human allergies.) I urge anyone considering a purebred cat to contact a breed-specific rescue group. If you are going to purchase from a breeder, do your research and only purchase from responsible breeders. Responsible breeders are individuals who have focused their efforts on one or a select few breeds and through breeding, historical research and ongoing study, mentoring relationships, club memberships, showing, raising and training of these breeds have become experts in their health, heritable defects, temperament and behavior. Responsible breeders are well suited to educate and screen potential buyers/adopters and provide follow-up support after purchase or adoption. Responsible breeders take lifetime responsibility for the animals they have bred. (Source: ASPCA Position Statement on Criteria for Responsible Breeding.)