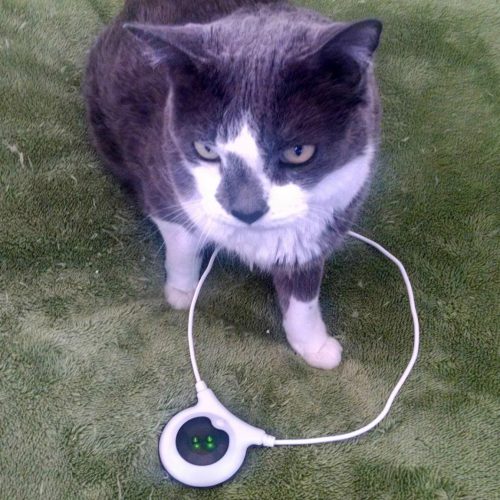 As an alternative to pharmaceuticals, many cat owners have turned to non-drug modalities like Reiki and acupuncture.  Another therapy that is garnering more widespread use is targeted pulsed electromagnetic field therapy (tPEMF™). This therapy can benefits cats with pain associated with arthritis, pancreatitis, wounds, or post-surgical swelling as well as many inflammatory conditions.

Assisi Animal Health created the Assisi Loop, a non-pharmaceutical, non-invasive device that is well tolerated by most cats. In fact, many cats really enjoy receiving Loop treatments. Because the Loop stimulates the body’s own healing process, rather than introducing a new substance (like a medication), even a sensitive cat body can handle it easily.

How the Loop is helping Sox with intestinal lymphoma and pancreatis

Sox is a 15-year-old grey and white kitty who was diagnosed with small cell GI lymphoma in May of 2013. Colleen Gately rescued Sox from the shelter when she was 12 weeks old. Colleen uses the Loop to treat some of Sox’s lymphoma symptoms, such as headaches, nausea (from her oral chemotherapy drugs) and pancreatitis flare ups. 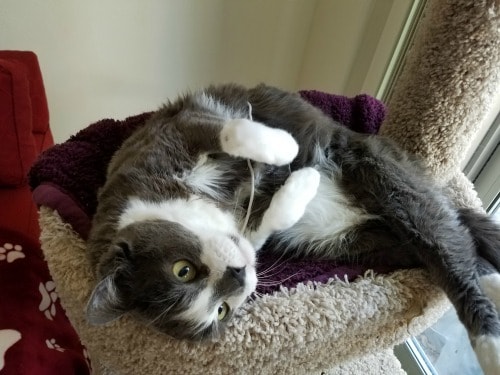 “Sox loved it immediately,” says Colleen. “The first treatment was done at UC Davis during an acupuncture session. The needles were placed, and then we put the loop on her — and she just fell asleep so contently. She was super annoyed when it was done!” Colleen purchased a Loop for home use. “Sox actually goes to it when she needs it,” she says, “and it helps me, too, because if she positions herself so it is around her head, I know she probably has a headache.” One time, Sox kept positioning the Loop around her rear end area. Colleen thought it was odd. When she took Sox to the vet, it turned out that she had a urinary tract infection. “So, it not only helps Sox by feeling better but it also informs me as to where she maybe hurting,” says Collen. “Oftentimes, I put the Loop on her belly for low-grade nausea or pancreatitis flare ups. She will start rolling around with the Loop on her, which I know means she is happy!”

During pancreatitis flare ups, Sox often sits in front of her food but won’t really eat. “After about an hour of Loop treatment, she will get up and eat,” said Colleen, “I can tell it really helps her.” 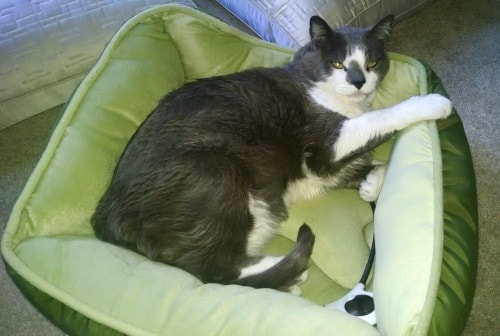 Colleen and Sox have gone through 15 to 16 Loops over the past two or so years. Colleen leaves the Loop on a bed, floor, couch, or cat tree and lets Sox tell her when she wants it turned on. “And she does!” says Colleen. “I have plenty of photos where she sits next to the loop and puts her paw in the center waiting for me to turn it on, at which point, she positions herself on the loop.”

For more information about how the Loop could help your cat, visit Assisi Animal Health’s website, contact them via email at info@assisianimalhealth.com, or call 866-830-7342.

Coming next month: How the Loop helped a cat heal from multiple injuries after being run over by a car

FTC Disclosure: This post is sponsored by Assisi Animal Health, which means I was compensated to feature this content. Regardless of payment received, you will only see topics on this site that I believe are of interest to my readers.