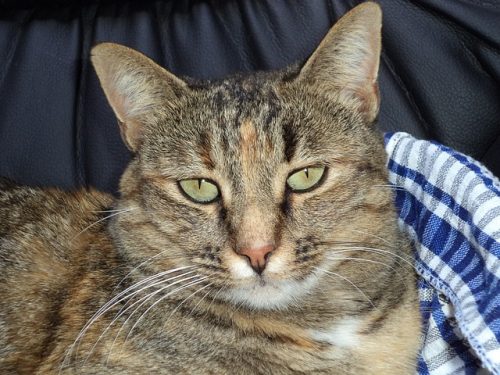 The pancreas is an organ in the abdomen located very close to the stomach, intestines and liver. It produces insulin which is necessary for keeping the body’s blood sugar stable. It also produces enzymes necessary for the proper digestion of food. When the pancreas becomes inflamed, digestive enzymes are  activated within the pancreas and the pancreas basically begins to “eat/dissolve” itself. Pancreatitis can be acute or chronic.

Not much is known about what causes pancreatitis in cats. The consensus among conventional veterinarians is that there is no known cause. It is believed that trauma, a viral or parasitic infection, or exposure to toxins may cause pancreatitis in some cats. Holistic veterinarians believe that there may be a connection between gastro-intestinal inflammation and pancreatitis, possibly caused by biologically inappropriate ingredients in highly processed commercial cat foods.

The most common signs of pancreatitis are lethargy and lack of appetite. Other symptoms include weight loss and dehydration. Less than 50% of cats with pancreatitis vomit or show signs of abdominal discomfort. Some cats will have a fever or become jaundiced, but that’s fairly rare.

Since there are no clear, overt symptoms, the cat’s veterinarian will need to run tests to make a conclusive diagnosis. Tests may include bloodwork, urinalysis, x-rays and/or ultrasound, and possibly a biopsy.

Treatment focuses on correcting dehydration and electrolyte imbalances, both of which are common in cats with pancreatitis. Cats may be given intravenous or subcutaneous fluids. Depending on the severity of the condition, cats may need nutritional support via a feeding tube. Additional treatment will vary depending on any underlying conditions and may include pain medications, antibiotics or steroids.

The prognosis is very variable depending on the severity of the case. Unfortunately, pancreatitis in cats is often chronic and will most likely recur over time. If enough pancreatic tissue is damaged, secondary complications can occur. One is diabetes, as the insulin producing cells are damaged, another is exocrine pancreatic insufficiency, as the cells that make digestive enzymes are damaged. In severe cases, the bile duct becomes obstructed.

Can pancreatitis be prevented?

Since so little is known about the causes of this condition, there are no definitive recommendations on how to prevent the condition. Since digestive enzymes play such an important part in a cat’s general health, supplementing your cat’s diet with a good enzyme product may help reduce the pancreas’ workload and reduce the risk of further episodes of pancreatitis.

While chronic pancreatitis is more common, the acute form can be life-threatening, and early diagnosis and treatment are critical.

26 Comments on Pancreatitis in Cats: A Serious and Potentially Life-Threatening Disease