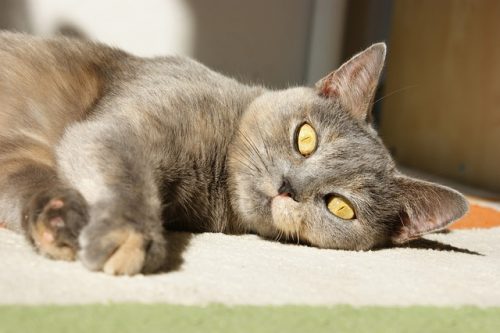 Chronic Kidney Disease, also known as Chronic Renal Failure (CRF) is a common condition in aging cats. It is the result of a gradual decrease in kidney function. Healthy kidneys act like a filter to remove waste products from the body. They regulate electrolytes such as potassium and phosphorous, and they produce erythropoietin which stimulates red blood cell production. Kidneys also produce rennin, which contributes toward regulating blood pressure. Kidneys also play a major role in turning vitamin D into its active form, which controls calcium balance in the body.

When kidney function becomes compromised, symptoms may be subtle at first, but the disease is progressive and irreversible, which is why early diagnosis and intervention is so important. Kidney disease can often be managed for many years with treatments such as fluid therapy, diet changes and medication. However, eventually, these treatments will stop working.

For some cats, a kidney transplant may be an option. There are only a few veterinary surgeons in the United States who perform this procedure. Lilian Aronson, VMD, BS, CACVS, founder and coordinator of the Feline Renal Transplant Program at the University of Pennsylvania School of Veterinary Medicine, has performed over 150 feline kidney transplants. “For the right cat, it can be an excellent treatment option,” she told AAHA PetsMatter. Most cats live an average of one to three years after the surgery, but Dr. Aronson had one patient who lived for an additional 13 years.

In order to be a candidate for kidney transplantation, a cat should not have any other significant health problems other than the kidney disease. Younger cats generally make better candidates than extremely old cats.

The cost of this procedure is most likely prohibitive for most cat parents. According to the University of Georgia College of Veterinary Medicine, “without serious complications, the estimated cost of a renal transplant is $12,000 to $15,000, including the donor and recipient. These costs are subject to change and serious complications do occur in some cats, resulting in increased cost. … Owners generally spend around $1,000 per year for medication and testing after the transplantation.”

One of the reasons why kidney transplants for cats are a viable option for cats is because it’s relatively easy to find a donor cat. Most cats have the same blood type—A—and unlike dogs, they don’t need to be related to be considered compatible. Additionally, cats, like people, can live normal, healthy lives with just one kidney. Aronson’s team conducted a study of 99 feline kidney donors from the program and found most had no associated long-term effects from kidney donation.

There is one condition: if you choose to have a kidney transplant for your cat and a donor is found from an animal shelter, you must adopt the donor cat, regardless of the outcome of the surgery.

There are also ethical considerations that need to be taken into account. Even if cost is not an object, should you put a cat through this type of surgery? Even though the donor cats will have a new home, is it appropriate to put a shelter cat through such an invasive procedure? Are you essentially risking the donor cat’s well-being by taking away part of their kidney function?

I think like every decision about a cat’s health, this is a decision that needs to be made for each cat by each cat parent. I can’t imagine wanting to put either my own cats or a shelter cat through this procedure, but that doesn’t mean it can’t be the right choice for someone else.

Would you consider a kidney transplant for your cat?

11 Comments on Kidney Transplants for Cats