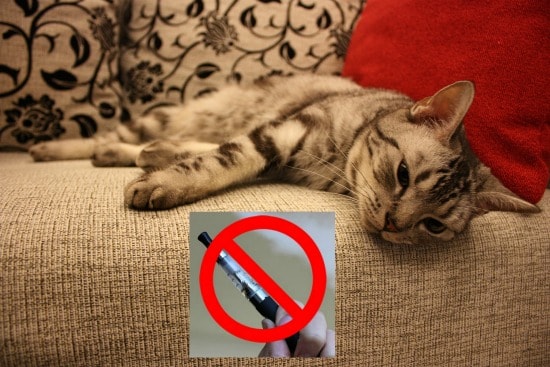 We’ve previously covered the dangers of secondhand smoke for cats: cats living with smokers are twice as likely to develop malignant lymphoma than those in non-smoking households. Cats with five or more years of exposure to tobacco smoke were at more than three times greater risk of developing lymphoma. Studies also suggest a link between oral cancer in cats and exposure to tobacco smoke. Some smokers are now using electronic, or e-cigarettes, and it turns out that the vapor from these devices is highly toxic to cats as well, and can even be fatal.

E-cigarettes feature a cartridge that holds nicotine, flavorings and other chemicals, a vaporizer. and a battery. The vapor is inhaled and then exhaled, just like a regular cigarette. E-cigarette use is also known as vaping.

Vaping puts cats (and dogs) at a dual risk: from nicotine, and from the chemicals in the cartridges. E-cigarettes contain a number of harmful chemicals, toxic metals and carcinogenic particles. A common ingredient in e-cigarettes, propylene glycol, can lead to red blood cell damage in cats known as “Heinz body.” Another common ingredient, diethylene glycol, may cause acidosis and kidney damage.

E-cigarettes also post additional risks from the liquid flavor cartridges. While this may be more of an issue with dogs than cats, some pets are attracted to the flavors. The cartridges contain high amounts of nicotine – one typical cartridge may contain as much nicotine as three regular cigarettes. Ingestion of nicotine is a medical emergency at any time, but immediate treatment is particularly important if your pet ingested an e-cigarette cartridge, since the nictoine will be absorbed much faster through the mucous membranes.

Additionally, cats living with someone who vapes are exposed to the second-hand aerosols from the vapor that is exhaled into the air. These particles may also settle into household dust. As cats come in contact with the particles, they will ingest them via grooming themselves.

The long-term effects of such exposures in pets are currently unknown. However, given what we do know, I think it’s safe to say that vaping is an unhealthy practice for both humans and cats.

26 Comments on E-Cigarettes Are Toxic to Cats