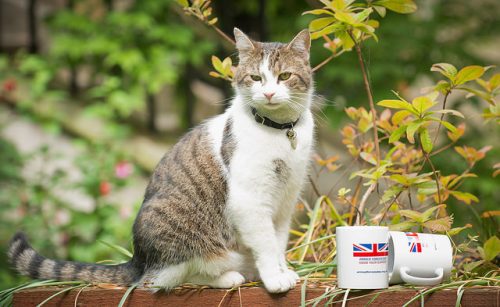 Britain’s new Prime Minister Theresa May moved into the official residence at 10 Downing Street on Wednesday as David Cameron left the office, but one important member of Britain’s government is staying put: Larry, the brown and white tabby who moved into the residence in 2011. The official mouser is considered a government worker and will continue to live at the famous address even after his boss packs his bags. For more about Larry and the tradition of Downing Street cats, visit NBC News.

If you missed any of the stories featured on the Conscious Cat this week, here’s a recap: on Sunday, we shared five business lessons cats can teach entrepreneurs, on Monday, we told you about a new blood test that can detect heart disease early, on Tuesday, we reviewed two supplements, and on Wednesday, we began a three-part series about nine cats who survived trauma and hardship and the woman who rescued them, titled Nine Lives: A Story of Catastrophe, Compassion and Caring. Click here to read part one, part two, and part three.

Today’s video makes me smile every time I come across it – because sometimes, you just need to see a cat pushing a tiny little cart…

3 Comments on Mews and Nips: Britain Gets New Prime Minister but Larry the Downing Street Cat Remains in Office