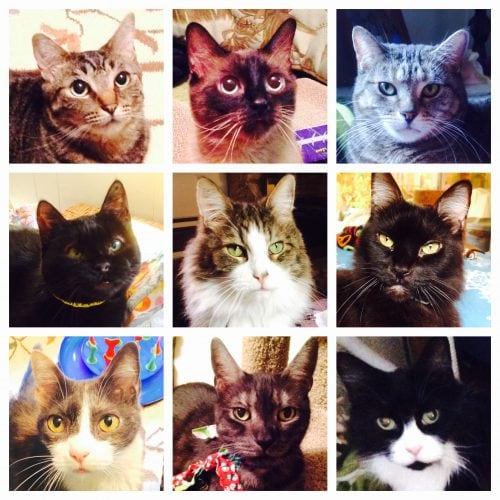 During my recent visit to Los Angeles, I met nine cats and Chery, the woman who is caring for them. I meet a lot of cats in my work, but rarely have I been as affected by an encounter as I was by this one. These cats lived through trauma and hardship. They are a testament to the resilience of animals, and their ability to live in the moment, no matter what they may have encountered in their past. Spending time with Chery and the cats was a magical and humbling experience. This is their story. The cats, left to right, first row: Tweety, Patterson, Sandy, second row: Julia, Zazu, Moofy, third row: Noodle, Ramses, Arwen.

On a warm October morning in Redondo Beach, Chery noticed a cat in the window of a woman’s car in the parking lot of her church. “Wow,” Chery thought. “She made friends with some of the stray cats behind the church.”

Chery decided to talk to the woman. Imagine her surprise when she started counting the cats in the car. There were nine, along with one large dog. Apparently, the woman had been living in her car with all the animals for quite some time. People at the church had been helping out when they could. Chery couldn’t get the cats out of her mind. She dropped off food, and a gift card to a pet supply store. She couldn’t believe that all these animals lived in that car.

A few days later, Chery went to her church to help sort items for a yard sale at the church. The temperature had skyrocketed to 92 degrees, which is unheard of in Redondo Beach. Chery knew that this kind of heat and animals in a car were a recipe for disaster. And sure enough, the homeless woman came running up to Chery, screaming “Help me! One of my cats is crashing!” Chery grabbed the ice pack from her lunch box and ran toward the car. She soaked a towel with water, wrapped up the ice pack, and scooped up the cat in it. “I’ve never heard a cat scream like that,” said Chery. “I was sure he was dying in my arms.”*

All Chery could think of was to cool this cat down. She handed him back to the homeless woman, jumped in her car to go home and get more ice (she lived just around the block from the church). When she ran into the house, she saw that her husband Paul was home. “He’s never home in the middle of the day,” said Chery. “There’s no such thing as a coincidence.” She said to Paul “I would never do this without talking to you first, but there is a woman with nine cats and a dog out there dying in this heat. Our guest house is empty and has air-conditioning.” Paul didn’t even hesitate. “Go get them,” he said. And Chery did.

They homeless woman and all her animals stayed with Chery and Paul for six weeks. As time went on, Chery learned about each and every cat. She learned about their wonderful personalities, their likes and dislikes. “I was amazed at how quickly they could recover from their circumstances,” said Chery. “They taught me once again that cats live in the present moment of their lives!” Chery admitted that at that point, she was in love with the cats.

She also learned that the homeless woman had some serious mental health problems, and she refused to get help for herself. After six weeks, the woman wanted to leave. She still had no home, and the cats would go back to living in her car. The thought of the cats going back to living in carriers in a car broke Chery’s heart. She begged the woman to leave the cats with her and to let her find good homes for them, but the woman told Chery she just couldn’t give them up. “ I couldn’t watch her put those sweet babies in carriers,” said Chery. She asked her to leave the key to the guest house on the counter when she left. Chery later found out that the woman had a history of using the cats to tug on peoples’ heartstrings to get money, which may have been the real reason why she didn’t want to give them up.

Chery eventually lost track of the cats, but she never stopped thinking about them.

Come back tomorrow for Part Two: The Cats Return

*Editor’s note: Zazu survived his heat stroke, but it is a common misconception that you should use ice to cool down an overheated animal as quickly as possible. It’s better to use cool water. Very cold water or ice can make the  blood vessels constrict, which actually slows how quickly the body can cool itself.

6 Comments on Nine Lives: A Story of Catastrophe, Compassion and Caring – Part One: Temporary Rescue