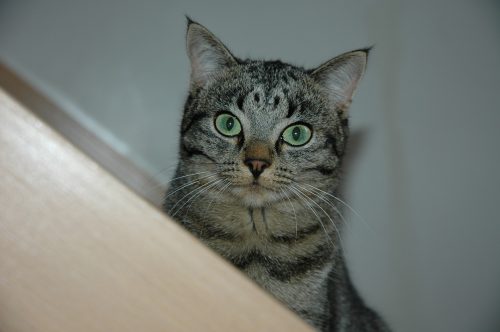 When you look up the definition of ADHD (Attention Deficit Hyperactivity Disorder,) some of the signs of the condition bear a remarkable resemblance to some of the words we use to describe our cats. While there is no such thing as an official diagnosis for cats, if your cat shows any of the symptoms described below, she may just have a touch of ADHD.

Does your cat get easily bored or distracted when you play with her? Ruby was the original ADHD kitten: she would play with one toy, then something else caught her attention, and she’d move on to batting that toy around. Humans with ADHD tend to be easily distracted by the “next shiny thing.”

Have you ever watched a cat watch a mouse? That is practically the definition of hyperfocus, a common trait of people with ADHD.

Cats think the world revolves around them. They think it’s okay to interrupt whatever you’re doing by lying on top of your keyboard or your papers. They see no reason not to wake you at 5am so you can feed them breakfast right NOW! People with ADHD can get carried away with excitement over something they feel needs to be done right here, right now, and they can’t filter out that now may not be the optimal time for others.

When was the last time your cat actually listened to something you wanted her to do? People with ADHD are often accused of not listening, although sometimes, that may just be because they’re busy with something else, and they know that if they’re interrupted, they’ll never come back to what they were originally doing.

If you’ve ever had a cat with petting aggression, who goes from seemingly enjoying being petted to lashing out at you, you know how quickly a cat’s mood can change. Mood swings are common for people with ADHD.

Cats are curious by nature. So are people with ADHD. They are often charming, gregarious and interested in what is going on around them. Highly social cats exhibit the same traits.

Is your cat a senior, but still races around the house like a kitten? If you pay attention to people with ADHD, you’ll often notice that they seem to have more energy than the average person. Peter Shankman, who has spent the past twenty years starting, building, and selling companies, as well as writing best-selling books, and teaching hundreds of thousands of people how to improve their personal and professional lives, created a website titled Faster Than Normal, which focuses on unlocking the gifts of the ADHD brain.

While ADHD in cats may not be treatable, and may, in fact, be an integral part of the feline personality, it is highly manageable in humans, especially when viewed as a gift rather than an affliction.

Do you think your cat has ADHD?

21 Comments on 7 Signs Your Cat May Have ADHD