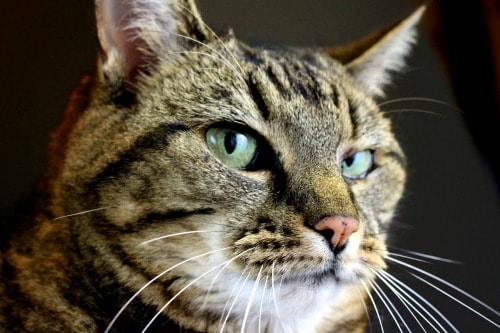 Trying to understand our cats is key to keeping them happy and healthy. But no matter how much we learn to read feline body language or try to interpret the sounds cats make, cats still remain a little mysterious. A study at the University of Edinburgh looked at both wild and domesticated cats to compare the cats’ personalities. The results may surprise you.

A comparison of the personalities of domestic cats and wild cats

When researches took a closer look at neuroticism in domestic cats, they found “the highest loadings on anxious, insecure, and tense, suspicious, and fearful of people”.

There are, of course, limitations to the study. Researchers rated the cats according to human personality traits, and while some of that may translate, cats are, of course, not small humans.

What does all of this mean for our house cats?

Researchers also only looked at cats in captivity, but I believe that’s actually why the study has important implications on how to make lives better for both domestic cats and cats in zoos. To me, it’s proof of just how important environmental enrichment is for cats both big and small.

Then again, neuroticism may explain a whole lot of feline behavior that we have no other explanation for.

Allegra and Ruby don’t have much use for this study. Allegra says she doesn’t need a study to know that Ruby thinks she’d like to rule the world. Ruby thinks Allegra is slightly neurotic because she tends to be a little anxious at times.

Do you think your cats are neurotic?

For more information about the study, pleas visit the Winn Feline Foundation Blog.

8 Comments on Are Cats Neurotic?