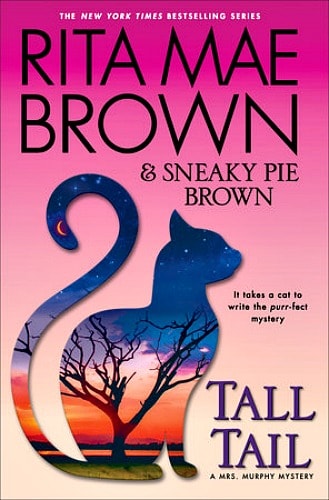 I have been a fan of the Mrs. Murphy mystery series by Rita Mae Brown (co-written with her cat Sneaky Pie,) featuring tabby cat Mrs. Murphy and her friends Tee Tucker the Corgi and Pewter, a rotund grey kitty who is sensitive about her weight, since the first book in the series came out in 1991. 25 years later, the series is still going strong.

In Tall Tail, the latest installment, Mary Minor “Harry” Haristeen and her animal friends try to solve a murder that ends up sending them to look for answers in the past. In this book, the authors weave together the present day story of the murder of the caregiver to a former governor of Virginia with a second story line set in the 18th century.

I found the historic parts of the story a bit hard to follow, but thoroughly enjoyed the rest of the book. Even with some skimming through the historical sections, it was fascinating to me to see how the two story lines came together in the end. Rita Mae Brown is often accused of being preachy in the newer installments of the series, and she certainly isn’t shy about weaving her personal views into the book, but I found that interesting rather than off putting.

My favorite part of all the books in the series is the interplay between the animal characters. While both authors excel at portraying immensely likeable animal and human characters, I suspect that the animal scenes are written by Sneaky Pie rather than Rita Mae – after all, who else but a cat would have such insights into the limitations of the human mind?

Tall Tail is available from Amazon and everywhere books are sold. 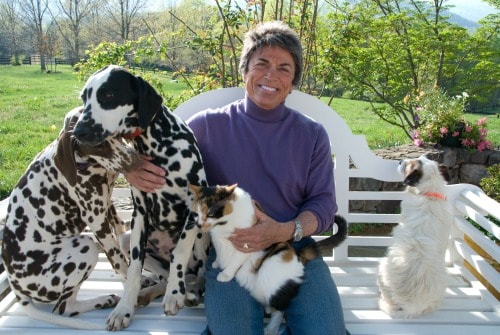 I’m delighted that I had a chance to ask Rita Mae Brown a few questions.

The first Mrs. Murphy mystery came out in 1991 – that would make Sneaky Pie 25 years old. I’m assuming that the original Sneaky Pie is no longer with you. What was it like for you to have to train a new cat to take over the important job of co-author? Was there ever a moment when you thought you would end the series after the original Sneaky Pie passed away?

The original Sneaky Pie lived to twenty. The original Pewter made it to twenty-four. Training replacements was easy. Cats are smart. I suspect they trained me. All my rescues: horses, cats, dogs and foxhounds live long, useful lives.

When the original Sneaky Pie died it didn’t occur to me to stop the series. Too many people enjoy the characters plus, in my small way, I hope they move people to go to shelters or donate.

Tell us about your other cats. Was one the model for Pewter?

Pewter I was fat as a tide. Vain Pewter II is never slender but also exhibits high self-regard.

You love being outdoors, and yet, you are an incredibly prolific writer. How do you make yourself come inside to write?

Coming inside depends on the season. I write in the morning in the winter as it is cold here at the very feet of The Blue Ridge Mountains.

Summer it’s the reverse. Work happens in the cool of the morning, come inside in the afternoon. As I now have air conditioning—resisted it for years—it’s pleasant and I don’t sweat on the pages. No running ink!

What does a typical day look like for you?

There is no typical day on a farm. One tries to rise at dawn but I can cheat and wait until full sunrise. Then it’s whatever needs to be done. Right now we need to cut hay—a great year for hay. However, it won’t stop raining. You don’t want it to go to seed. If it dries out even a wee bit we will literally work from sun-up until sundown. I love it.

How much longer do you plan on keeping the Mrs. Murphy series going?

So long as people wish to read it.

If you could have dinner with anyone, living or dead, who would you choose?

Aristophanes, the 5th century BC comic playwright and my father, Ralph Clifford Brown. Living: Condoleezza Rice, Liz Smith, Iris Love—all women of great breath of mind and generous spirit. The list could go on: Gloria Steinem, Sondra Radvanovsky. Some of these ladies I know, others I do not, but all have given of themselves to others, to their respective nations.

Right now there are so many exciting people on earth, you can’t miss.

Or what about putting together these people minus myself? Donna Shalala, former Secretary of Health, Education and Welfare with President Jahnae H. Barnett of William Woods University, an educational visionary. Throw in the president of Sweet Briar College. That’s a group worthy of prime time TV—not a boring moment.

Finally, we could bring back mother. Let her take the center stage. Fasten your seatbelts.

10 Comments on Review and Interview with Rita Mae Brown