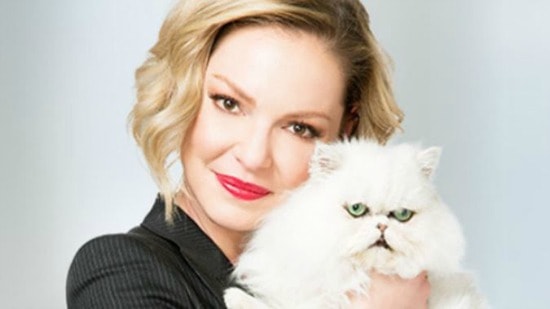 I’ve been a fan of Katherine Heigl since her Grey’s Anatomy days (anyone else still miss Izzy?), but I didn’t really know all that much about her. I was delighted to find out that she’s a huge animal lover. She lives in Utah with her husband, two daughters, four dogs and five cats.

Heigl recently partnered with Cat’s Pride for a national media campaign. While the campaign is obviously designed to sell litter, it also aims to promote animal welfare. Cat’s Pride will donate a portion of every Fresh & Light Ultimate Care purchase to support the work of the Jason Debus Heigl Foundation.

Founded by Katherine and her mother Nancy, the organization’s goal is to increase awareness of inhumane animal treatment and support efforts for rescue, medical care, training and placement needs in the Greater Los Angeles area. The foundation is named after Heigl’s brother, who was killed in a car accident at age 15, and is meant to serve as a lasting legacy to the compassion, kindness and memory of this beloved son and brother.

A couple of weeks ago, I was invited, along with a very small group of other journalists, to join Katherine Heigl in a Google Hangout. Katherine answered questions ranging from her beauty routine to work-life balance as a working mother to new projects she’s working on. Of course, I asked about her cats!

Katherine and her family have five cats, and all of them are rescue cats. She rescued Stanley and Charlie from an LA shelter when she was 22 years old. “They are still going strong,” she said with a smile. “They’re like old cranky men now.” Whiskey was rescued when the family was driving through Utah and saw a “free kittens” sign by the side of the road. They actually took two of the kittens, but lost one. “It was heartbreaking,” said Katherine. Bob was named by Heigl’s husband and musician Josh Kelly. “He’s the friendliest cat,” said Heigl. “He likes to be around people and on peoples’ laps all the time.” Then there’s Cherry Jerry. “We thought he was a girl when we first adopted him,” said Heigl. “It’s very confusing for him!” 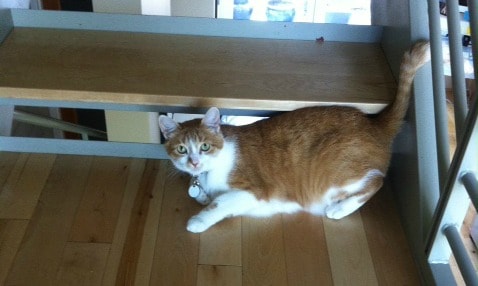 You can watch the full interview with Katherine Heigl below.

Share photos and stories about your cat and have a chance at winning up to $2,500 in Prizes!

For more information about Cat’s Pride litter, and to enter their “Couple of the Week” contest, visit http://www.catspride.com.