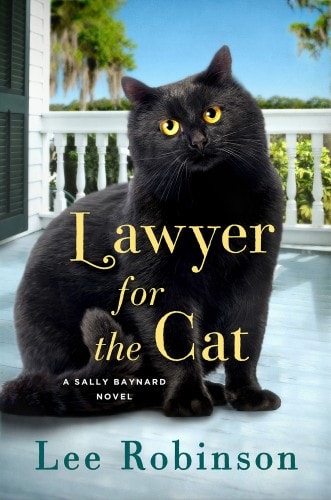 Romance, mystery, and a black cat – I had a feeling I was going to like Lawyer for the Cat a lot. Set in the beautiful city of Charleston, South Carolina, this book features 50-something year-old Sally Baynard, an attorney who has is asked to represent a cat who is the beneficiary of a multi-million dollar trust and a plantation.

Sally Baynard is one of the best lawyers around. In the years since her divorce from Family Court Judge Joe Baynard, she dedicated herself to representing the worst and craziest Charleston, S.C. had to offer. But none of the murderers, burglars, or angry divorcing clients compared to Sherman, the dog her ex-husband appointed her to represent. Although the miniature Schnauzer found his way into her heart (and brought his handsome vet Tony along too), his case was a thorny one. With that business out of the way, Sally is happy to move back to non-canine clients… until a probate judge asks her about a cat.

Agreeing to represent Beatrice, a black cat who’s the beneficiary of a multi-million dollar trust and a plantation, Sally must put her wit, charm, and brains to the test, choosing among three colorful potential caregivers while dodging the former owner’s angry son.

I thoroughly enjoyed this book. The characters, especially the protagonist, are immensely likable. In addition to handling the fascinating legal case at the center of the book, finding a caregiver for Beatrice, Sally also deals with family issues, including caring for an aging mother with Alzheimer’s, the challenges of midlife dating and romance, and the feline-human bond.

I felt an instant connection with Sally Baynard and had a hard time putting this book down. This is a fast, light and thoroughly entertaining read which will appeal to cat lovers and fans of cozy mysteries and romance.

Lawyer for the Cat is available from Amazon and everywhere books are sold.

7 Comments on Review: Lawyer for the Cat