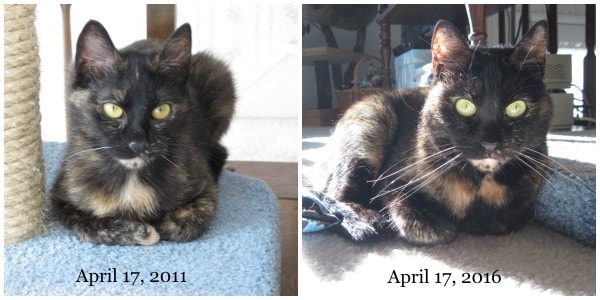 Hi everyone, it’s Ruby! Today is a very special day for me! It’s my 5th adoption anniversary! Five years ago today, Mom brought me home to live with her and Allegra. What a great day that was! I am such a lucky girl.

Did you know that my name was Cinnamon before Mom changed it to Ruby? She said she wanted me to be named after a gemstone, because I’m such a gem!

Ingrid: How is it possible that Ruby has been with us for five years? She still looks and acts like a kitten. I know it’s hard to tell in photos sometimes, but she’s much smaller than Allegra. Allegra is long and lanky, Ruby is short and compact.

Ruby: I can’t wait to see what Mom and Allegra have planned for me to celebrate. I hope there will be tuna cake!