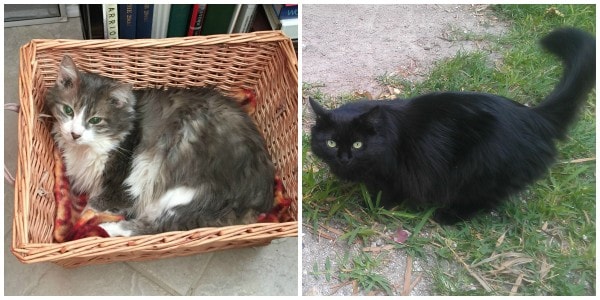 From time to time I’m asked if I’d be willing to auction off a character naming opportunity in one of my mysteries to benefit a charity. I’m always happy to do so and enjoy figuring out how the new character will fit into the story. A few years ago, I was asked to contribute this kind of item for the Key West SPCA. Of course I agreed. The highest bidder chose to immortalize her schnauzer, Schnootie. So in Death With All the Trimmings, the dog became a character on the houseboat adjacent to the one where my food critic lives in the Key West mysteries.

Schnootie was a lot of fun to write, and so I offered the same opportunity to the SPCA the following year. Schnootie’s mother bought the naming rights a second time, and asked that her elderly black feline, Dinkels, be added to the mix. But later I heard that a couple in my neighborhood was distressed that they hadn’t bid high enough to win for their elderly feline, so I layered Jack into the story, too.

I thought you might enjoy reading this scene from Killer Takeout, which hit bookshelves yesterday. The scene takes place on the houseboat where Schnootie, Dinkels and Jack now live. If you follow the Key West series, you will remember that both Hayley and Miss Gloria have cats who live on the boat next door. (Don’t even think about all those litter boxes on the high seas!)

As I puttered up to the parking lot in front of Tarpon Pier, feeling the breath of relief and gratitude that always greets me when I realize I’m at home, I heard a huge ruckus on the dock. The racket radiated from Schnootie the schnauzer, whose barking echoed hysterically from the Renharts’ houseboat. As I strode up the finger, I spotted Miss Gloria on the Renharts’ deck. This never happens because Mr. Renhart abhors socializing. Over the incessant yapping of the schnauzer came the shrieking and growling of what sounded like hyenas. A lot of them.

I was pretty sure I recognized Evinrude’s angry cat voice among the yowls.

I broke into a trot, arriving just as Miss Gloria dove into a cartoon maelstrom of spinning legs and feet and fur and emerged with my tiger cat.

And that break in the action gave enough space for Miss Gloria’s black cat Sparky to rush back into the fray. So much was happening that I wasn’t certain who was fighting—or how many of them. But when Schnootie lunged into the whirling fur, I saw my chance and snatched Sparky out. Her chest heaving, Mrs. Renhart wrestled down two other long-haired cats, one pure black and one furry gray with a white face and neck and striking green eyes.

“Oh my gosh,” she said, her voice squeaky with exertion. “What a way to meet the new neighbors. And I so hoped my new kitties could be friends with yours.” She looked utterly bedraggled and forlorn, the two big cats clutched under her arms.

“These belong to you? Let us put our guys away,” I said, gritting my teeth as I smiled. “Then we can have a proper introduction.”

Coming tomorrow: Enter to win a copy of Killer Takeout! 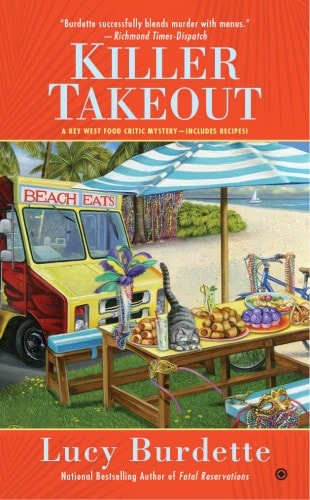 Killer Takeout is available from Amazon and everywhere books are sold.

6 Comments on The Cats of Key West’s Tarpon Pier