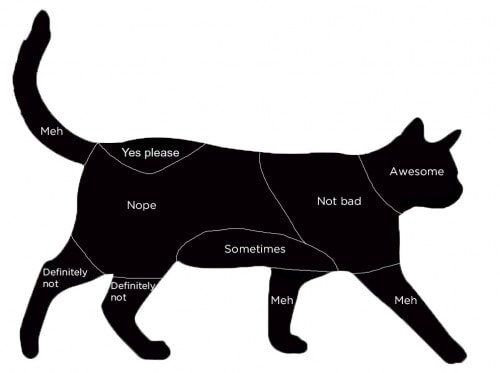 Most of us learn as we go about our cats’ petting preferences. Some cats like to be rubbed all over, others only like certain parts of their bodies touched, and some cats can be pretty forceful about letting us know that they would prefer not to be petted there, thank you very much, something that is also known as petting aggression.

A recent study aimed at finding out where cats enjoyed being stroked (or not) and whether the person doing the stroking had any influence on the cats’ response. Researches were also interested in investigating whether the base of tail area is a “yes stroke me” or a “no way” zone and if the answer depended on what areas were stroked before it. For instance, do cats need to be stroked on the head and down the back before touching the base of tail, in order to find it pleasurable?

The University of Lincoln study with the official title of “The influence of body region, handler familiarity and order of region handled on the domestic cat’s response to being stroked,” headed by behaviorist Dr. Sarah Ellis of International Cat Care, looked at 34 healthy cats between the ages of 6 months and 12 years who had been in their homes for at least 2 months. The cats were stroked on eight different areas on their body, both by their owners and by someone unfamiliar to them.

One of the biggest surprises of the study results to me was that being stroked by the owner (when considering all the scores for all the body regions together) led to more negative responses than being stroked by an unfamiliar person. However, this may have been caused by the somewhat unnatural setting of the study (cats may be used to being petted by their owners, and may have become frustrated and confused, or cats may have been used to their owners interacting with them in ways that were different from that of the strangers.)

The order of areas being stroked (from head to base of tail or from base of tail to head) had no influence over the negative responses shown. The greatest negative responses occurred when cats were stroked at the base of their tails. This surprised me, since in my experience, most cats love to have that spot rubbed, often resulting in “elevator butt,” a raising of the cat’s hindquarters, which seems to be a pleasure response.

So where do cats really like to be petted?

The bottom line seems to be that where a cat likes to be petted may be driven by each cat’s preferences, and it’s up to us to figure out what our cats like.

You can read more about the study on Katzenworld.

What about your cats? Do they have a preference where they like to be petted?

Image via Katzenworld, used with permission.

9 Comments on Pet Me Here, but Don’t Pet Me There