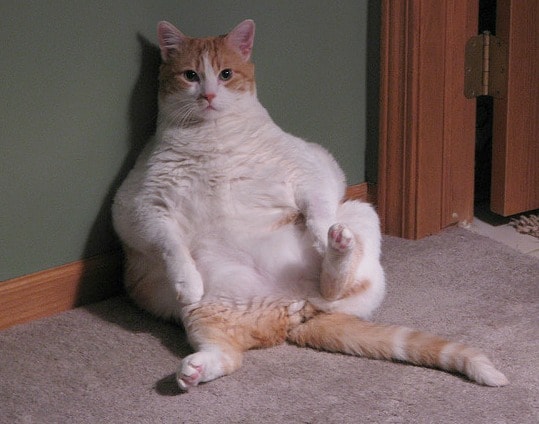 Last week we wrote about the obesity epidemic among America’s cats (58% of cats in this country are either overweight or obese) and the serious health risks of obesity. What makes this trend so disturbing is that it is created entirely by the guardians who love their cats. There are no obese cats in the wild. Our cats rely on us to make appropriate nutritional choices for them, and one of the biggest mistake cat guardians can make is to equate food with love.

Getting a cat to lose weight can be challenging. It may require making changes to a cat’s feeding schedule, changing the food itself, increasing the amount of time spent playing with the cat, and more. Read Weight Loss Tips for Cats for guidance on how to get your kitty to a healthy weight.

Getting a cat to lose weight can also require a healthy dose of mental fortitude on the part of the cat’s human. Most overweight cats won’t be happy with reduced amounts of food, a different feeding schedule, and fewer treats. Cat guardians are often worried that their cat won’t love them if they stop giving them what they want. Some eve fear that their cat may become aggressive.

A recent study conducted at the Cornell University School of Veterinary Medicine suggests that cat guardians need not fear rejection if they put their cats on a diet. In fact, the study found that after eight weeks of being on a diet, the cat actually showed more affection toward their guardians.

For the study, 58 obese cats were fed one of three restricted diets, equal in calories. Owners were asked to record prefeeding begging, following, meowing, and pacing. They were also asked to record postfeeding behaviors such as jumping in the lap, purring, resting, sleeping and using the litter box.

Kitty may complain at first, but will be happier in the long run

What these findings suggest is that while kitty may be complaining a bit more during the first four weeks of a diet, eventually, she will be happier, presumably, because she will be healthier and feel better, and demonstrate her increased happiness by showing increased affection to her guardians.

Feline veterinarian Dr. Fern Crist recently wrote an article for us on how to transition your cat to a healthier diet, and her advice also applies to helping your cat lose weight: “Cats generally don’t like change of any kind, and they will be temporarily grumpy about a change in their food. What you do: ignore the grumpiness.” She recommends thinking of your cat as a two-year-old toddler. “You already know how (and why!) to say no to your child when she pulls a Terrible Two on you,” says Dr. Crist. “It is exactly the same with your cat. Your cat is simply a whiny child, and you already know how to deal with that. Ignore the melodrama. It will pass. You know better than your cat.”

5 Comments on Cats on a Diet: Will They Still Love You?