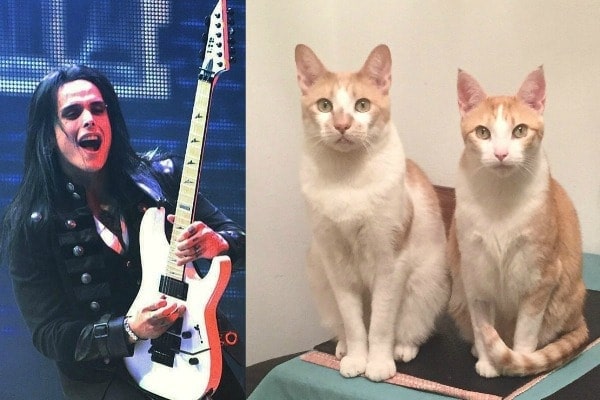 I love busting stereotypes when it comes to cats and the humans who love them. Cat lovers come from all sorts of backgrounds, and there’s no such thing as a typical cat person. We do ourselves, and cats, a huge disservice by insisting on perpetuating stereotypes. Today, I’d like to introduce you to Bill Hudson, who is anything but a typical cat guy. Heavily tattooed, with multiple piercings, this heavy metal guitarist, songwriter and guitar teacher looks every inch the tough guy – but Bill has a soft spot not just for cats, but all animals. 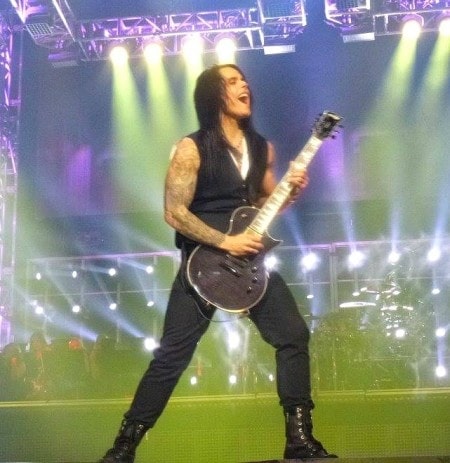 Bill was born in Sao Paolo, Brazil. He started playing guitar at the age of 12. He moved to Los Angeles in 2005, where he attended the Musician’s Institute of Contemporary Music. Bill performed with a variety of bands, including Cellador, Circle II Circle and Jon Oliva’s Pain. Most recently, Bill was on tour with the wildly popular Trans-Siberian Orchestra. I met Bill backstage after a TSO show this past December, and much to my delight discovered that in addition to being a supremely talented guitarist, Bill is also a huge animal lover. He and his wife share their LA home with their two cats, Mougli and Fozzi, and Paco, a Chihuahua mix.

Bill graciously agreed to answer some questions. I hope you enjoy “meeting” this consummate animal lover as much as I did.

Tell us a little about your pets. 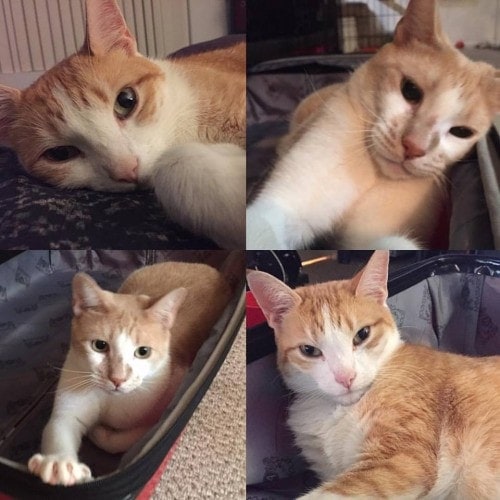 Mougli was our first pet and he is almost 9 years old. If I remember correctly, his mother was hit by a car and all of the kittens had to be hand-fed. He was the runt and almost didn’t make it. We call him our “cat-dog” because he’s so friendly and loves everyone. He’ll go right up to you, lay on your lap and start purring after meeting you for the first time!

We got Fozzie in 2012, so he’s a little over 3, from a no-kill cat rescue organization in Los Angeles. We’d been wanting to get a friend for Mougli and they’re pretty much inseparable. He’s not as outgoing as Mougli, but he’s a lover once he gets to know you!

Paco is our min pin/chihuahua mix dog and the newest member of our family. We got him in June 2014, he just turned 2 in August. He was in a foster home through a rescue organization that works with one of the Los Angeles city shelters and my wife found him on Facebook. We signed up to foster-to-adopt and within 15 minutes we knew he was ours! We take him out basically everywhere with us, and always try to find dog friendly things to do. He has the cutest ears in the world and loves belly rubs!

Do all three get along?

Absolutely! Fozzie is not the biggest fan of Paco, he generally avoids him and Paco loves to mess with him for that. Paco and Mougli will cuddle if they are on your lap together and every once in a while they will even play together! We’re very lucky that they can all exist in the same space as well as they do. 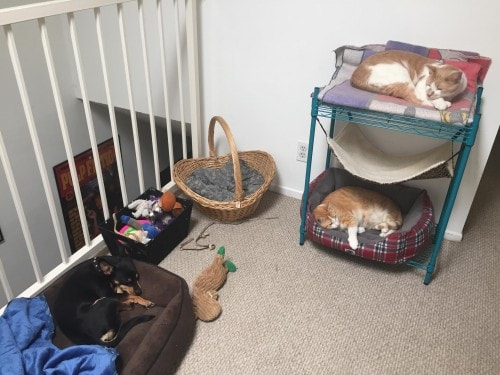 You’re on the road a good part of the year. It must be hard to be away from your pets for long stretches of time. How do you cope?

My wife sends me photos of them pretty much everyday! We also Facetime a lot! It’s not the same surely, but it helps! I’ve also taken Paco with me to a 6-week rehearsal period in Florida, haha! I have a lot of different photos of them on my phone, plus Paco has his own Instagram and Facebook page and I always see the posts he makes 🙂 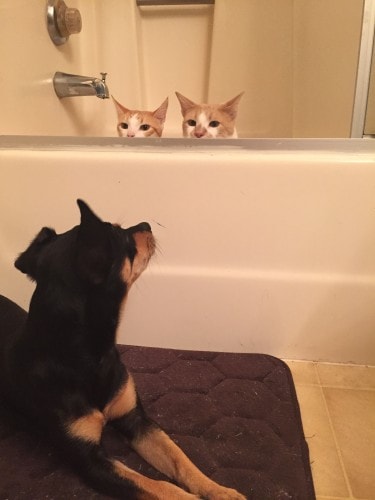 What does a typical day with your pets look like for you when you’re not on the road?

I normally feed all 3 of them around 8 AM and walk Paco around my neighborhood several times a day. Sometimes I’ll take him to a dog park nearby. Then everyone eats again around 5 PM. During the day they just hang around the house…nothing special. Mougli and Paco both like to lay on my lap while I work on music, that’s really cute and sometimes I just stay in the chair because they’re comfortable, haha. 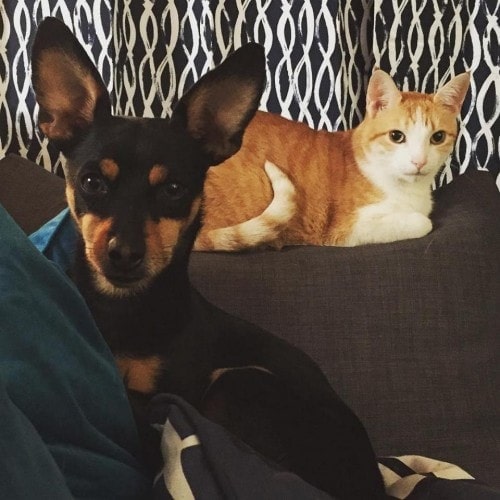 We tried to get leashes for the cats but didn’t work out very well, hahaha. They just like to hang out at the house. They like laying in the sun on the balcony during the day, not to mention they have a million beds to choose from.

I would imagine that Mougli and Fozzie are used to hearing music all the time. However, not all cats enjoy loud music. How do yours react to music?

I would think they’d leave if it bothered them, but Mougli will jump on my lap and just sit there while I work on music, or listen to it. He, Fozzie and Paco all seem to be okay with it.

Do they have a favorite genre or band?

I wouldn’t be able to say… haha.Whatever I’m working on at the time. 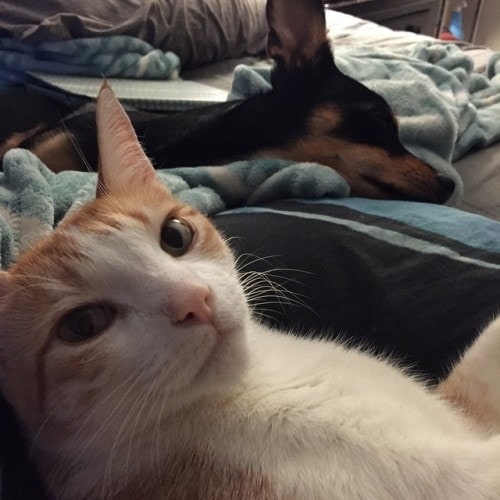 Have you ever written a song about your cats?

Not yet, but I have written an instrumental song named “Paco”. There are no lyrics, so the song isn’t exactly ABOUT him, but he was sitting on my lap while I wrote it…so I named it after him.

You volunteer with a local shelter whenever you’re not on tour. What do you do at the shelter?

Kinder4Rescue is a low cost clinic based in North Hollywood. They do amazing work to help people keep their pets in good health. We go and feed the dogs they have for adoption as well as help with little things at the clinic.

We also help at their adoption events from time to time as well as the fly-outs they do with Project Flying Chihuahuas. They rescue small dogs from a local shelter and fly them across the country to another no kill organization where there is a shortage of small, adoptable dogs so they can help get them adopted so they aren’t euthanized! My wife also helps with Forever Fido Rescue. It is a completely volunteer based organization that rescues pets from high kill shelters and puts them into foster homes until they get adopted. They also hold adoption events but we help get the word out about their dogs via social media to help get them seen and adopted into loving forever homes. 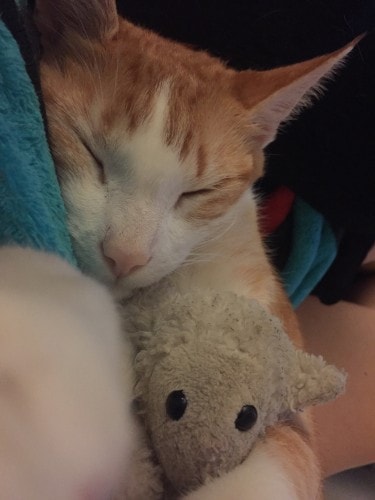 I didn’t grow up with pets, but after I got my own I’ve become an animal advocate. It was an odd thing to learn all about them as an adult. But now, it is my goal to be able to help as many as I possibly can. My pets have taught me so much. They love unconditionally and in a way I had never experienced before. There are so many adoptable animals in shelters that are being euthanized simply because there isn’t enough space. I want to help spread the word about the adoptable animals, that come out of shelters. Rescue an animal. Change its life, and yours, forever. #AdoptDontShop #RescueDontBuy 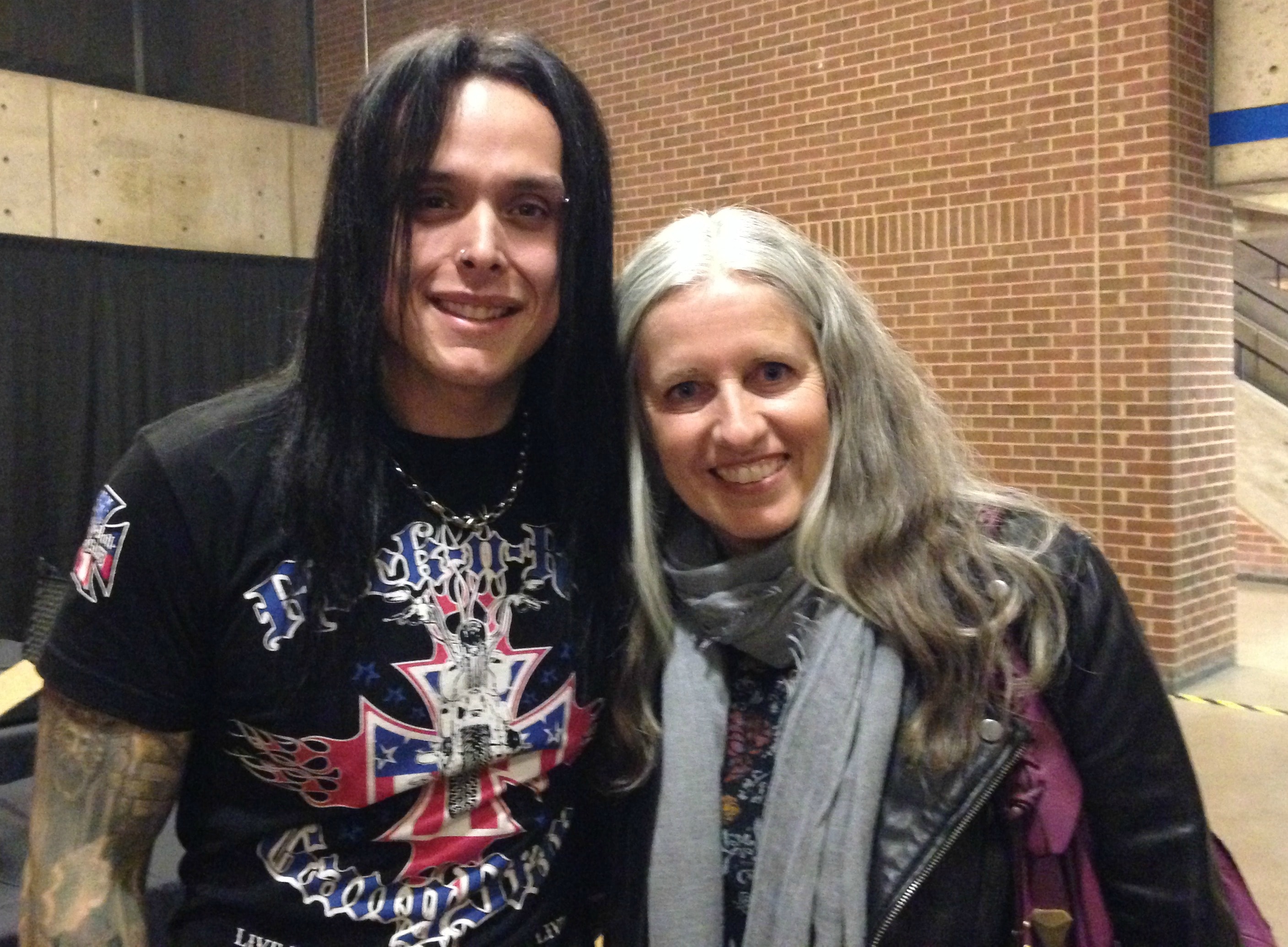 Photo of Bill at top of post via ESP Guitars, photo  of Bill on stage by Patrick Larson, all other photos © Bill Hudson, used with permission

11 Comments on Cats and Guitars: Bill Hudson Is Not Your Average Cat Guy