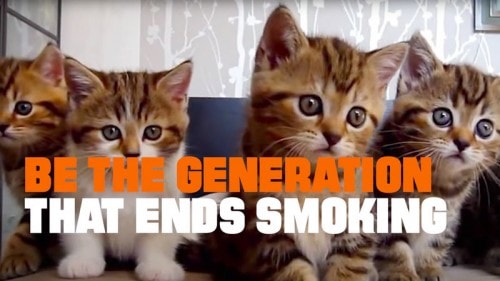 The health risks of secondhand smoke for humans are well known, but have you ever thought about how it can also affect your cats? Cats’ lungs are much smaller and have less reserve than human lungs. Additionally, cats will also be affected by the residue of cigarette smoke that ends up on their fur and skin and on furniture and carpets even after the air has cleared. This is known as thirdhand smoke, and it causes its own set of dangerous problems.

Cats living with smokers are twice as likely to develop malignant lymphoma than those in non-smoking households. Cats with five or more years of exposure to tobacco smoke were at more than three times greater risk of developing lymphoma. Studies also suggest a link between oral cancer in cats and exposure to tobacco smoke. It is thought that cats groom the tobacco residue off their fur, which then damages tissues in the mouth, leading to cancer.

A 60-second public health commercial using the hashtag #CATmageddon, which debuted during the Grammy’s on February 15, communicated this message in a highly creative, and also chilling, manner. “Can Smoking Kill Cat Videos?” is the premise of the video: smoking = no cats = no cat videos. This video is a departure from previous anti-smoking campaigns in that it highlights the health effects of smoking on pets rather than humans.

Aimed at teens and young adults, the ad capitalizes on the cultural phenomenon of cat videos, and gets at the heart of the issue: while people may not care about their own health, they do care about their pets. I have seen this dynamic many times in my years working in veterinary hospitals: clients who smoked and had been unable to quit were able to give up cigarettes after their pets were diagnosed with asthma or cancer.

Are e-cigarettes safe around cats?

And if you think the new fad of e-cigarettes (also known as vaping) is any safer for cats, think again. Even though there are no studies of how e-cigarettes affect pets, they can contain a number of toxic chemicals, including diacetyl, which has been linked to obstructive lung disease in humans, and propylene glycol, the same ingredient that is in antifreeze. Antifreeze is deadly to cats.

I hope this commercial achieves its goal.

If you’re a smoker, would knowing that your habit endangers your cat’s health give you incentive to quit even if you haven’t been able to quit in the past?

9 Comments on Protect Your Cats from Secondhand Smoke