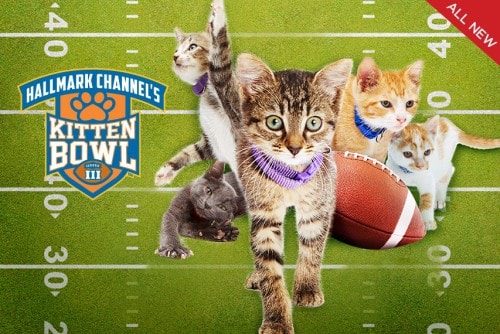 Now that this year’s Super Bowl is set to take place in California between the Carolina Panthers and the Denver Broncos, we can all start to pay attention to the game that really matters: Kitten Bowl III, a celebration of all things adorable and cat-letic, will air on Supurr Bowl Sunday at 12pm ET/PT on the Hallmark Channel.

TV Personality and North Shore Animal League America spokesperson Beth Stern will be back again to host the championship game, alongside legendary, iconic radio voice of the New York Yankees John Sterling as the game’s official play-by-play announcer. The kittens are already hard at work training for the big game. They know how important this game is, because playing in the Kitten Bowl is not just about winning. All of the kittens are hoping to be adopted after the game. 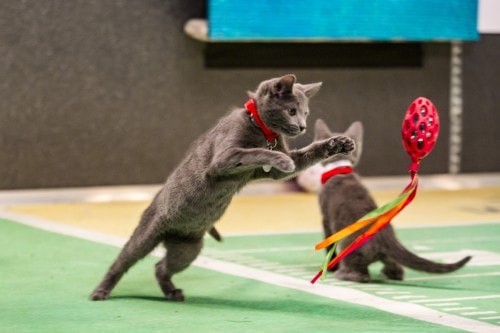 “Not only are these cats some of the best players in the Feline Football League, but also they are looking for their forever homes,” said Boomer Esiason, four-time Pro Bowl quarterback and Feline Football League Commissioner. “These champions will make loving and playful additions to any family looking to adopt an animal in need.”

This year, the Hallmark Channel has added features that will allow you to participate in the phenomenon that is Kitten Bowl III in several different, super fun ways.

You can make your own cats part of the fun by uploading their photos to the Cat-Lete Card Creator to create player cards. Allegra and Ruby had a lot of fun creating theirs, and there was quite a bit of spirited debate going on when it came to picking teams, but ultimately, they decided to play on the same team. 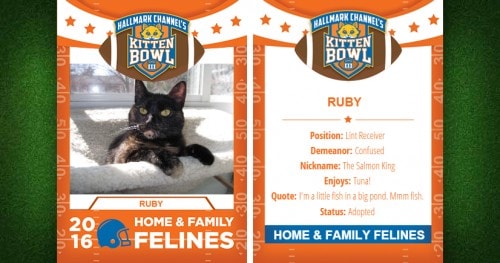 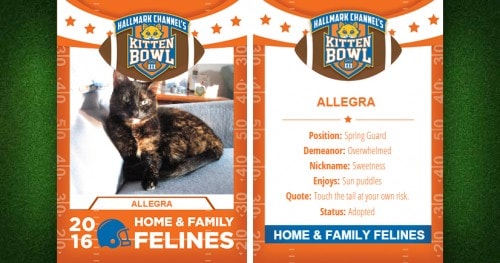 Get the Kitten Bowl Emoji App

You can also download the Kitten Bowl Emoji App (available for iPhone and Android) to spruce up  messages sent from your mobile devices. Beyond regular texts, you can use the emojis in top messaging apps like What’s App, Facebook Messenger and iMessenger. Fair warning: it will make you less productive, because you’ll get lost in trying to pick the purrfect kitten for each message! 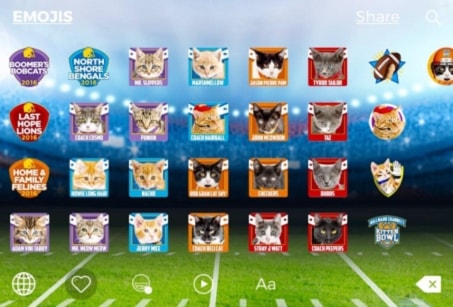 During the big game, you can increase the fun by live sharing with other cat lovers. Simply use hashtags #kittenbowl and tag @HallmarkChannel to join the conversation.

In past years, some of you have mentioned to me that you don’t get the Hallmark Channel, or that adding it would be too expensive. I recommend that you check with your cable provider. For me, getting it only added $2 or $3 a month to my cable bill, and since I love watching sappy romantic movies as well as some of Hallmark’s original series, I definitely get my money’s worth. 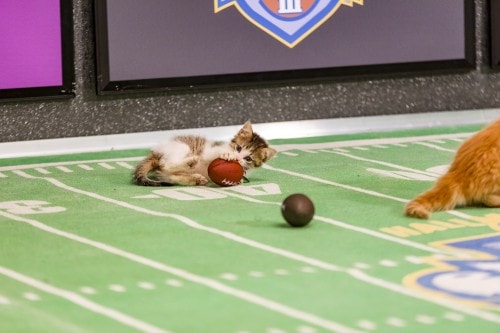 I’m not a big football fan (although this year, I find myself compelled to route for the Carolina Panthers …) but I am looking forward to the Kitten Bowl each year. And the good news is that if you miss the live airing, you can catch it in reruns on the Hallmark Channel in the days following the game.

For more information about Kitten Bowl, please visit http://www.hallmarkchannel.com/kitten-bowl. You can also find the Hallmark Channel on Facebook and Twitter.

FTC Disclosure: This is a sponsored post, which means that I was compensated to feature this content. Regardless of payment received, you will only see topics featured on this site that I believe are of interest to our readers.

10 Comments on Are You Ready for Some Adorable Football? Kitten Bowl III Takes Place This Sunday!