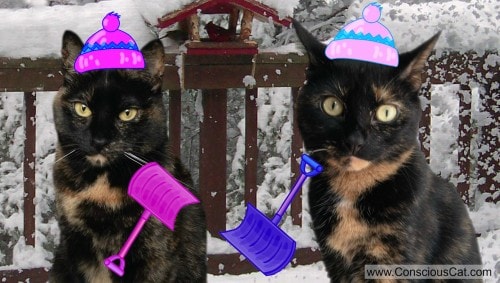 Allegra, Ruby and I made it through the Blizzard of 2016! I admit that I don’t handle severe weather as well as I should. I get pretty anxious when weather forecast contains words like “monster storm” and “life-threatening storm” – especially when my trusted forecasters at the Washington Post, who are not known for hype, use those words. Weather anxiety is becoming a recognized psychological disorder, which is not surprising, given our obsession with the weather. Checking weather apps is the number one smartphone use.

I’m a firm believer that when life throws a challenge our way, the best thing we can do is look for the lessons. And this blizzard certainly had a few in store for me.

The waste of worry

As the forecast became more and more ominous throughout the week preceding the storm, I had to apply everything I ever learned about what a waste worrying is. I had to keep telling myself that I can’t control the weather, or the power company. (Losing power was my biggest concern. We’re on electric heat, and don’t have an alternate heat source.) As a recovering control freak, that part was really hard, and required a constant effort of reminding myself to trust that all will be well.

I prepared as best as I could. Extra canned cat food in case we lose power and our raw food goes bad? Check. Bottled water? Check. Fill the empty spaces in the freezer with ziploc bags filled with water? Check. Extra batteries? Check. Extra tuna? Sorry Ruby, even a blizzard doesn’t get you extra tuna, but I did pick up extra treats. Preparing gave me a feeling of being in control of what I could control, and also allowed me to do a better job of letting the rest of it go.

Being alone during extreme weather

One thing that I find very difficult during extreme weather is being the only human in the house. Over the years, I’ve learned to reach out to others in the same situation. My BFF and I, who live about 10 miles apart, have gotten each other through hurricanes, blizzards and severe thunderstorms just by talking on the phone frequently throughout the day and night. Another friend and I texted back and forth several times a day. Friends from all over the country reached out via email and Facebook to check on me. Knowing that so many friends were concerned and wished me well made me feel less alone.

How the girls handled the blizzard

Severe weather can also be stressful for Allegra. Ruby is fearless, but Allegra used to have a tough time with snow. Something about the whiteness outside seemed to really disorient her to the point of sending her into hiding. The sound of plows going up and down the road behind our house used to upset her. I loaded her up with Stress Stopper before the storm arrived. At first, she was very nervous, pacing from window to window, and eventually hiding for an hour or two. I was really concerned that this was going to make for a couple of very long, stressful days for her, but after a few hours, she seemed to accept that snow and plows were the new normal, and she did fine. It was a good lesson for me to stop worrying so much!

And then there was the shoveling. We got almost 30 inches of snow. From the handful of other blizzards I experienced, I knew that if you don’t stay on top of it, shoveling that much snow can be completely overwhelming, not to mention physically dangerous. I went out five times during the 36 hours the storm raged to keep up, sometimes during near blizzard conditions.

Shoveling taught me to be mindful of how I moved. I have had back issues in the past, and I made sure I shoveled the way they tell you to: bend at the knees before lifting, don’t twist and toss snow, and, most importantly, use a snow shovel with an ergonomic handle. Whenever I started to grumble about having to deal with this snowy mess, I reminded myself to be thankful that I was physically capable of doing it. In between rounds of shoveling, the girls snuggled up with me to keep me warm.

By the time the storm wound down Saturday night, I was able to start to relax. My house had stayed toasty warm, I kept up with shoveling, and even though it wasn’t the most fun I ever had, it gave me a profound sense of accomplishment that I was able to take care of myself and my home.

By today, most of the snow has melted. I still have snow in the shady parts of my yard, but I can see patches of lawn again. Even the giant piles of snow in parking lots around the area seem to be shrinking a little.

I’ll be happy if I never have to see this much snow again, but I’m grateful for the lessons the blizzard taught me. And since the plows didn’t come through my street until a few days after the storm, Allegra and Ruby were grateful that the blizzard kept me home even more than usual.

27 Comments on Conscious Cat Sunday: Lessons from a Blizzard