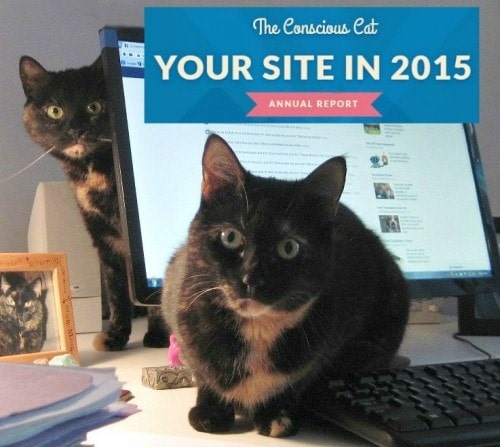 Every year, we receive a report from WordPress, the platform our site runs on, that shows us how our site performed in 2015. I won’t bore you with all the small details, but even though I keep track of the site’s statistics daily, seeing some of the numbers in an annual report even blew my mind just a little bit, and I wanted to share some of them with you.

Yes, you read that right. Our site was viewed 2.5 million times in 2015. The Louvre has 8.5 million visitors per year. If The Conscious Cat were an exhibit at the Louvre, it would take about 107 days for that many people to see it.

Allegra: It’s a museum in Paris, France, little one. But never mind that. Do you realize that more than 2 million people visited our site last year?

Allegra: You bet it is!

Busiest day of the year

Our busiest day of the year was December 29 with 40,698 views. Our post Does Your Cat Have Pandora Syndrome? got the most views that day.

Ruby: December 29? Hmm. All I can remember is that I took a nice long nap that day…

Most viewed posts of the year

Our five most viewed posts of the year were

The Best Food for Your Cat: My Recommendations (originally written in March of 2012, but I keep this post updated with current information)

Tortitude: The Unique Personality of Tortoiseshell Cats: Fact or Fiction? (written in September of 2014)

Does Your Cat Have Pandora Syndrome? (written in May 2015)

Where do our readers come from?

We have readers in 220 countries! Most visitors come from the United States. The United Kingdom and Canada aren’t far behind.

Ruby: Wow! That’s a lot of countries! Do you think we can go visit all of them, Allegra?

Allegra: You wouldn’t like that, Ruby. You’d have to go in a carrier and on an airplane to get to those countries.

Ruby: You mean like how Mom does when she leaves us?

Allegra: Well, she doesn’t go in a carrier….

Thank you to all of you who come to visit us each and every day, and who have helped grow this site into what it is today. We’ve come a long way from that first post on March 1, 2009!