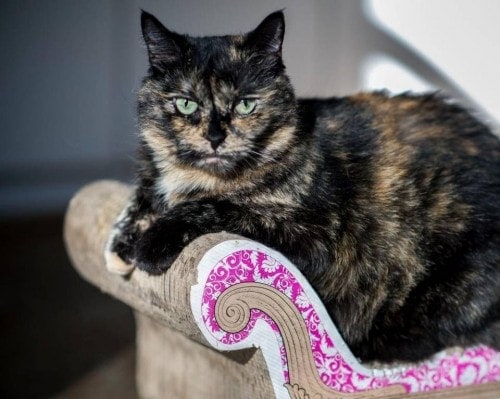 Veterinarians from UC Davis have discovered, in recently published research, that cats with calico and tortoiseshell coat patterns tend to challenge their human companions more often than cats of other colors. This certainly comes as no surprise to anyone who has ever been owned by a tortie or calico, but I found it interesting that we are starting to see studies that seem to confirm that tortitude is real.

The Sacramento Bee reports that the research backs up long-standing observations among veterinarians that such cats often are “difficult,” Dr. Elizabeth Stelow, a behavioral expert in the UC Davis Veterinary Medical Teaching Hospital, told the Bee. Her study, based on a survey of more than 1,200 cat owners, found that calicos and torties are more likely to hiss, chase, bite, swat or scratch during interactions with humans.

In the study, cat guardians were asked to use a scale from 0 to 5 to report frequency of behaviors such as hissing and biting. Analysis found statistically significant differences between the frequency of these behaviors in “orange” females, including torties and calicos, and most other cats.

There are limitations to the study from a scientific standpoint, primarily the fact that researchers relied on observations from the cat guardians they surveyed, rather than observing the cats themselves. More research is needed to really explore this theory, but I’m hopeful that this research will come eventually.

Then again, do we really need a study to prove that torties are unique?

You can read more details about the study in The Sacramento Bee.

Photo of Frieda, who is available for adoption from Lapcats.org, via The Sacramento Bee