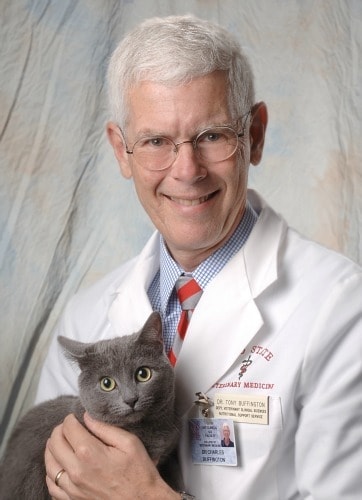 In part one of my interview with Tony Buffington, DVM, PhD, DACVN, Emeritus Professor of Veterinary Clinical Sciences at The Ohio State University College of Veterinary Medicine, Dr. Buffington talked about why he founded the Indoor Cat Initiative and how providing an enriched environment benefits cats. If you missed part one, you can read it here.

Dr. Buffington was the PhD advisor for Judi Stella, PhD, now a Science Fellow at the Purdue Center for Animal Welfare Science, for a landmark study* of the connection between stress and illness in cats has changed how veterinarians view and treat feline lower urinary tract disease.

Many cat guardians by are still unaware of just how much their own stress can affect their cats’ health. How can veterinarians do a better job educating cat guardians on this connection?

Judi was an unregistered veterinary technician when she came to work for me as an assistant in 2006. She is one of the best animal observers I have ever met (and I have met many); within a month of her arrival, she came to me to tell me that the colony was not as enriched as it could be, and she proved that she was right.

For the next three years, Judi was in the colony twice a day, almost every day, observing the cats’ behavior around her, around the animal caretakers, and around the veterinary staff. As she continued to improve the colony environment, she found that the best predictor of when a cat was truly getting better was when they started to play and interact with their surroundings (which could take months), and that cats were so three-dimensional that moving a cat from a lower to an upper cage could literally save its life. I am gratified to say that Judi’s efforts resulting in her being awarded a PhD in applied animal behavior from Ohio State in 2013, ensuring cats of another generation of environmental enrichment champions.¹’²’³

I’m an educator, so I think education is the key; early, effective, and often. For veterinarians, this means more and better education (lecture, lab, and clinical) in animal behavior and handling, both for healthy cats and sick patients in clinics and in shelters. And for the majority of cats that don’t (yet) come into contact with veterinarians, effective education for guardians also can come from “cat communicators” like you, and from the manufacturers and retailers of the products these people use every day. (This is why I attended the Purina Better With Pets Summit – to help them see the value of this education.)

Even though the number of cats in US households is getting close to overtaking the number of dogs, cats are still gravely underserved when it comes to veterinary care. One recent study found that 52% of America’s 74 million cats are not receiving regular veterinary care. The actual number is probably much higher, since this study only captured data from cat guardians who do seek some veterinary care, not those who never take their cat to the vet. The stress of taking a cat to the vet (for both cat and guardian) is one of the most frequently cited reasons for this. Can environmental enrichment contribute to addressing this issue, and if so, how?

Yes it can. This is the reason that I have joined the Fear Free™ Board of Directors. In addition to enriched home environments that permit cats to positively interact with humans and other animals, the entire veterinary experience – from the moment the appointment is made through transport, reception, examination, procedures, and the return home to “reintroduction” into the home environment all offer opportunities to enrich the experience for both the cat and their guardian. There currently is a Fear Free™ task force developing educational modules designed to transmit this knowledge to veterinary care teams in collaboration with the American Animal Hospital Association. The first modules should be available early next year, with more to come.

On a more personal note, how many cats do you have?

We currently are “catless”. My wife and I got our first cat, Baxter, as a wedding present in 1972. We had him until his death in 1992. We adopted Stormy (who subsequently had severe FIC) in 1993, and she was with us until 2012. Family and other “life” issues kept us from having more cats for a while, but now that we are home in California we are ready for more.

Did you always know you wanted to be a veterinarian?

No, I initially wanted to be an English teacher. My perspective changed while I was in the service, so that by the time I was discharged and started at UC Davis, I had decided to try for a career in veterinary medicine. I grew up on a cattle ranch in central California, so was around veterinarians all my life, so I certainly admired their education and skill. This led me to want to be a large animal veterinarian, but there weren’t many jobs to be had when I graduated. My wife had a good (special education) teaching job, and the Vet School offered me a position in graduate school as part of their effort to retain some veterinarians in academic medicine.

What made you decide to work with cats?

When I was an undergraduate at UC Davis I was in the nutrition department. Drs. Quinton Rogers and Jim Morris were studying the amino acid requirements of cats, and I got a job working n the colony. I have always loved cats, and found that I was pretty good at working with them. too. I continued to work in the colony after graduation, and got my PhD based on studies of what was then called “Feline Urologic Syndrome”,** which at the time was (erroneously, as it turned out) thought to be the result of a magnesium-ammonium-phosphate stone in the urinary bladder that had formed due to consumption of a poorly formulated diet. It was these studies, and their limitations, that eventually led me to wonder if the problem in cats might be similar to interstitial cystitis in people.

What do you consider the three most important things that cat guardians can do to improve their cats’ lives?

In order, they would be to:

1. Understand their needs – recognize that cats are (developed through evolution):

a. Solitary, opportunistic hunters, which makes them territorial, and explains their need to scratch to keep their claws healthy.
b. Prey for larger carnivores, including dogs and people, so they need to be able to climb, and have protected places to eat, drink, eliminate, sleep, and hide to feel safe.
c. Confined, much like zoo animals, so they depend on their guardians for everything, including enrichment, to permit them to thrive.

2. Learn to read cat body language. Cats communicate their ability to cope with (thrive in) their environments by their behavior. Guardians can quickly learn to determine whether their cat is “doing fine, thank you” or “not so good today”.

3. Meet their needs. Use the knowledge acquired in 1 and 2 above to create and maintain an environment that ensures their cat’s ability to thrive and be as healthy as possible for as long as possible.

Dr. Buffington Dr. Buffington recently released both an iTunes U course and a companion digital book entitled Cat Mastery. This beautifully designed course and book explores the history of cats, and the challenges they face living indoors through interactive images and diagrams, videos. I highly recommend the book and course – even experienced cat guardians will learn something new from it.