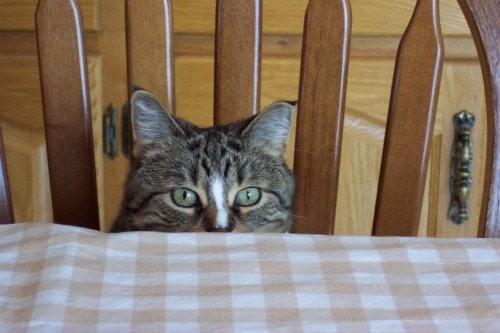 Even though cats tend to be more discriminating than dogs about ingesting random toxic substances, cats do get into the strangest things. With many toxins, immediate emergency treatment is critical to prevent life-threatening complications. The following 10 substances are the most frequently seen toxicology cases in veterinary emergency clinics.

Even though this is a more common problem with dogs, because cats do not have the ability to taste sweets, some cats do get themselves into trouble. The toxic components in chocolate, caffeine and theobromine, vary in concentration, depending on the type of chocolate ingested. The highest concentrations are found in cacao beans, dry cocoa powder and unsweetened baking chocolate. Symptoms of chocolate toxicity include vomiting, panting, restlessness, seizures, weakness and heart arrythmias. Treatment includes inducing vomiting, administration of activated charcoal, gastric lavage and enemas if large quantities have been ingested, and IV fluids. Prognosis is favorable with immediate treatment, but guarded if the pet is having seizures.

Amphetamines are used in humans to treat obesity, attention deficit disorder and narcolepsy, and are illegally diverted as street drugs. Symptoms of amphetamine toxicity include agitation, vocalization, vomiting, abdominal pain, diarrhea, tremors, seizures, and coma. Amphetamine ingestion requires immediate emergency treatment. Prognosis varies depending on the severity of symptoms, but is usually good if treatment is initiated immediately.

All plants in the lily family are toxic. Calla and Peace Lilies are local irritants, Lily of the Valley causes heart arrhythmias. The truly toxic lilies, including Easter Lilies, Stargazer Lilies and Tiger Lilies, cause renal toxicity, which, if not treated immediately, will be fatal. Every part of the lily is toxic, even the water they’re in. Signs of lily toxicity include vomiting, lethargy, anorexia within 6-12 hours of ingestion. Immediate treatment is critical to survival, and will include  aggressive intravenous fluid therapy for at least 48 hours after ingestion. Activated charcoal may be administered to neutralize any remaining toxins in the digestive tract. After 18-24 hours, the prognosis, even with treatment, is poor.

Now that Marijuana has become legal in many states, veterinarians are seeing more signs of marijuana poisoning in pets. Toxicity occurs when the drug is inhaled as second hand smoke, or ingested in the form of rolled joints, brownies (which add chocolate poisoning into the mix) and other laced edibles. More common in dogs than in cats, signs, which can start within 30-90 minute of ingestion or inhalation, include altered mental state, vomiting, hypersalivation, seizures, and coma. Treatment will include induction of vomiting and supportive care, and prognosis is usually favorable unless complications such as pneumonia develop.

NSAID’s (drugs like ibuprofen (Advil© and Motrin©), narproxen sodium (Aleve©), as well as many veterinary drugs) are highly toxic to cats. Signs include vomiting, diarrhea, abdominal pain and ulcerations, lethargy, and acute renal failure. Treatment includes decontamination, IV fluids and supportive care. Prognosis varies with the dose ingested, treatment, and whether the cat has pre-existing renal or gastro-intestinal disease.

Pyrethrins are found in many topical flea control products. Reactions are more common in cats, and often occur when pet guardians mistakenly use a dog product with a much higher concentration of pyrethrins on cats. They can also be ingested if a cat grooms right after a product for cats has been applied (or if the cat grooms a dog to whom the product has been applied). Even some of the topical products made for cats have toxic doses of pyrethrins if they are ingested through grooming. Symptoms include hypersalivation, vomiting, twitches and tremors, seizures, and coma. Prognosis is usually good with prompt and aggressive treatment.

There are few reports on grape and raisin toxicity in cats, most likely because most cats wouldn’t eat them. Researchers have been unable to identify the toxic component of grapes, and 50% of patients will never develop clinical signs after ingestion.

For cats who hunt, rodenticide ingestion can occur via prey that has been poisoned. Since there are many different chemicals used in rodenticides, and treatment varies with each poison, prognosis for affected cats varies greatly.

SSRI’s are used in human medicine to treat depression and in veterinary medicine to treat behavioral problems. Symptoms of toxicity include vomiting, agitation, muscle rigidity, tremor, and seizures. Treatment will include induction of vomiting, decontamination with activated charcoal, IV fluids and supportive care. Prognosis with treatment is generally good.

Xylitol is a natural sweetener derived from sugar alcohol that is found in products ranging from chewing gum to baked goods to chewable vitamins. Items that have xylitol listed as one of the first five ingredients can result in severe toxicosis within 15 minutes of ingestion. There is some debate over whether xylitol is toxic to cats, but according to the ASPCA, it can prompt a sudden release of insulin in cats, resulting in low blood sugar, a condition known as hypoglycemia. Signs of xylitol ingestion include a sudden lack of coordination, vomiting, lethargy and, eventually, seizures and possibly coma. Xylitol toxicity can lead to liver failure, which can be fatal.