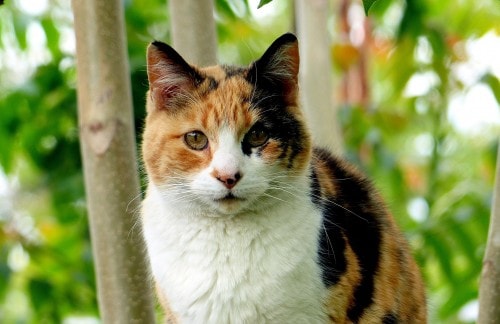 A new study at the University of California Davis suggests that there may be a link between feline aggression and certain coat colors. Lead researcher Dr. Liz Stelow and her team looked at data from 1,274 anonymous cat caretakers who answered an online survey about their cats’ behavior.

Guardians reported sex-linked orange female (tortoiseshells, calicos, and “torbies”), black-and-white, and gray-and-white cats to be more frequently aggressive toward humans in three settings: during everyday interactions, during handling, and during veterinary visits. Sex-linked genes are genes that are carried by either sex chromosome.

Are you surprised to see torties and calicos on this list? While the survey’s findings seem to validate that tortitude is real, I would interpret these results with a healthy dose of caution. Keep in mind that the data is based on reports by the cats’ guardians, not independent observation of the cats’ behavior. I suspect that some of the feedback may have been biased simply because tricolor cats have a reputation for being more feisty and temperamental, and this may have skewed the data a bit.

The study’s lead researcher cautioned against relying on the study’s findings and against choosing to adopt a cat purely based on coat color. “It’s not that your average white cat is an angel and your average calico is a devil,” Dr. Liz Stelow of the University of California-Davis told The Huffington Post. “We’re looking at a continuum here.”

I’m hoping that the often overly simplified media coverage around this study won’t deter people from adopting certain cats based on their coat color. It’s important to remember that ultimately, every cat, regardless of coat color, is an individual.

For more information about the study, please visit The Huffington Post. You can also find the study’s abstract here.