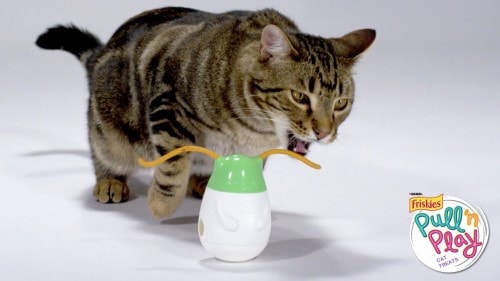 I get multiple requests to review toys and treats almost every day. The majority of these requests are for clever, innovative and fun designs, and I share the ones that I think you’d be most interested in on this site. Every once in a while, I get a request to review a toy that just doesn’t look good to me, so I politely decline, and that’s the end of that. Reviews, by their very nature, are always in part opinion: just because I don’t like something doesn’t necessarily mean it’s not a good product.

For that reason, I don’t usually cover products I don’t like. However, I’m making an exception for Friskies®’ new Pull ‘N Play toy – for the simple reason that in the more than six years I’ve been publishing The Conscious Cat, I have not seen a more ill-conceived cat toy and treat design.

When I first received the pitch to promote this toy, I let the PR agency know in no uncertain terms that this toy is quite possibly the worst idea for a cat product I’ve seen in a long time. Then it fell off my radar, until a Conscious Cat reader brought it to my attention again last week. I decided that I needed to write about this product after all.

Let me be clear: even though Friskies® is not a brand I recommend, I’m not posting this to  malign the company. I respect and support what Friskies® and its parent company, Nestle Purina Pet Care, are doing to promote the bond between cat and humans. The company’s charitable giving arm has done amazing things to improve cats’ lives, and I applaud them for this. I truly  believe that this company cares about cats. Perhaps that’s why I was even more stunned by the utter design failure of this new product.

What is Pull ‘N Play?

Pull ‘N Play is a wobbly cat toy named Wobbert that can accommodate two treats at once: the new Pull ‘n Play strings which fit into the toy’s ears, and regular treats that can be put into the toy’s belly. As per Friskies®’ PR pitch, the treats are the “first and only tender, edible strings for cats on the market.”

Who on earth thought it was a good idea to create a treat that would make cats think that eating string is okay?

The treats themselves are not dangerous (although the ingredients leave a lot to be desired….), but I believe that allowing cats to play with these string toys is only going to entice them to play with anything else that looks like a string. 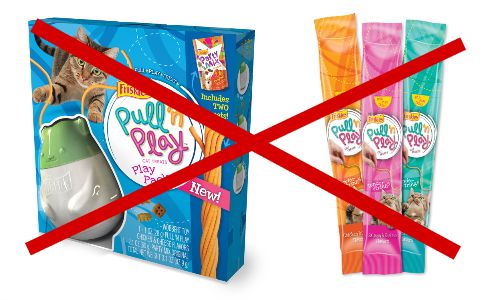 Ingesting string can be life-threatening

I find it hard to believe that this toy made it to market. I would imagine that at least some of the many veterinarians employed by Friskies® and its parent company, Nestle Purina Pet Care, must have voiced their concern about this product.

Ask Friskies® to take this toy off the market

If someone at Friskies® is reading this: I urge you to take this toy and the treats off the market. If you’d like to add your voice to my call to remove this unsafe product, please contact Friskies® through their website.