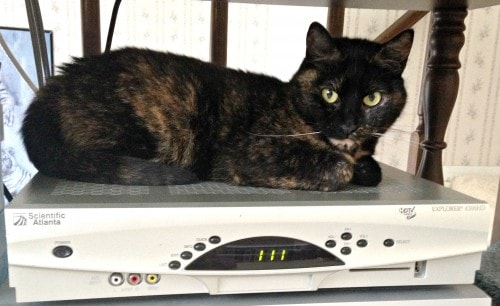 No matter how many cat beds I put around the house, the top of the cable box is one of the most coveted napping spots, especially during the colder months. Allegra and Ruby must have worked out a schedule, because they both seem to get equal time on it. All of my cats over the years have always enjoyed napping on the cable box, and these things must be pretty sturdy, because I can  only imagine the amount of cat hair that ends up inside.

Last week, however, the cable box met its maker in the form of a small hairball.

Now mind you, since the girls eat a raw diet, they hardly ever get hairballs – three or four times a year, if that. And when they do happen, they seem to happen in the middle of the night on the bedroom carpet. This one, however, happened in broad daylight. On top of the cable box. I came home from running errands to find the display on the receiver had gone dark. After I unplugged it and plugged it back in, and it still wouldn’t work, I pulled it out, and found the evidence. I’m pretty sure Ruby was the culprit, since she was on the box when I left the house.

I bet the conversation between the girls went something like this:

Allegra: Now look what you did, Ruby!

Ruby: I didn’t do it on purpose! I felt yucky, and next thing I know, it just came up!

Allegra: You could have at least moved to an area where it’s easier for Mom to clean up your mess.

Ruby: You know those green numbers that are usually on front of the cable box?

Allegra: You mean the time of day?

Ruby: Whatever. But you know what? They’re not there anymore…

Ruby: Help me fix it, Allegra!

Allegra: I don’t know how.

Ruby: But you always know everything!

Allegra: We’ll have to wait for Mom to get home.

Ruby: Don’t tell her I did it!

Allegra: She’ll figure it out anyway, but you know she won’t be mad at you.

Ruby: That’s true. Because I’m cute. She says so all the time. 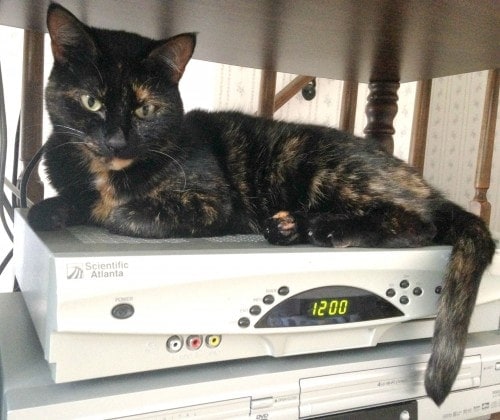 Obviously, this was not a big deal. I picked up a new cable box later that day, and the girls are back to enjoying their favorite nap spot. The only “punishment” for Ruby will be that she’ll now have to share my lap with my iPad when I catch up on the shows that I recorded on the ruined DVR – something she’s not crazy about.

17 Comments on Allegra, Ruby and the Cable Box