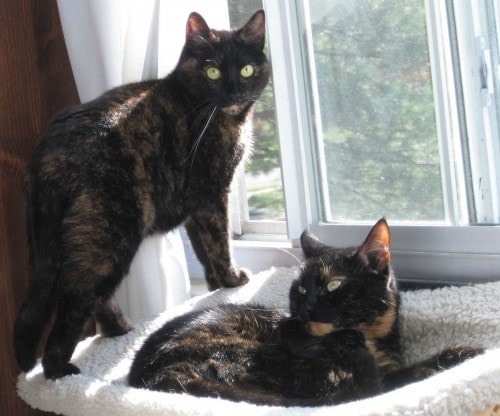 Even though I have absolutely no scientific evidence, in my experience, when it comes to being talkative, tortoiseshell cats have most other cats beat.

Buckley was one of the most vocal cats I’ve ever come across. She had a range of expression from an almost silent meow to a very loud, demanding cry that almost approached a scream. I often heard her meowing or chattering somewhere in the house. It was almost as if she felt compelled to provide a running commentary on her activities: “I think I’ll go in the bedroom now.” “Oh, maybe I’ll jump up on the window perch. That looks like fun.” “Oh, look! There’s a big blue bird by the feeder!” It seemed that her constant delight at everything in her life needed to be expressed out loud.

Ruby has quite a sound repertoire as well. She squeaks. A lot. It’s a very happy little sound that can range from low volume to extremely high pitched and loud. She squeaks when I talk to her, she squeaks when I touch her, and she squeaks to announce her arrival in a room. She also makes this sweet little noise that’s somewhere between a squeak and a chirp when she first joins me after I’ve gone to bed. It’s like her “here I am, Mom, let’s snuggle” sound, and it makes my heart melt.

Allegra’s also has quite a range of vocal expressions. She makes a little “brrpp” chirping sound when she’s excited about a toy. Sometimes, she seems to use it for no reason that I can see, so I assume that she’s just particularly happy right then. She also uses a pitiful sounding little whine when she sees me fix my meals in the kitchen. Usually this is accompanied by her putting her paws on my legs, and she’ll only stop once I let her sniff whatever it is I’m making. Since I’m vegetarian, most of the time, that sniff will result in a scrunched up face on her part and she’ll walk away.

The other day, Ruby surprised me with a variation in her talking repertoire. It’s a chattering sort of meow that I’d previously only seen when she sees a bird outside the window. Occasionally, she’ll also make that same sound when she sees the reflections of light off my phone or iPad screen on the wall or ceiling. But that day, she was just lying on my lap, and all of a sudden, she started chattering away. We were sitting by the window, and while there was nothing that I could see, she clearly had a lot to say about something!

Are your torties chatty? Do you think torties talk more than cats of other colors?

FTC Disclosure: This post contains Amazon Associate links. This means that if you decide to purchase through any of our links, we get a small commission. We only spread the word about products and services we’ve either used or would use ourselves.

41 Comments on Tortie Talk: Are Tortoiseshell Cats More Talkative Than Other Cats?