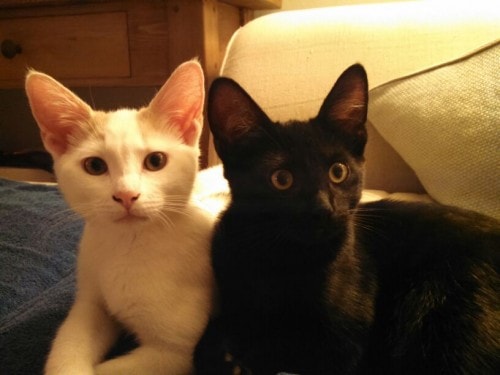 Cat lovers will understand that naming a new cat is serious business – even if the feline is fictional. One of my regular characters, Evinrude, is the handsome gray tiger who lives with food critic Hayley Snow on her houseboat. He steals the show and makes the cover every time a book comes out. In case you are wondering where he got his name, Evinrude is a brand of boat motor.

For my sixth Key West food critic mystery, Fatal Reservations, I had a new character emerge—but first, a little background. Hayley Snow’s dear friend, Lorenzo the Tarot card reader, is implicated in a murder after his flame juggling nemesis, Bart Frontgate, turns up dead. Lorenzo begs Hayley for help, and then he disappears, after sending a text begging her to look after his new kitten. 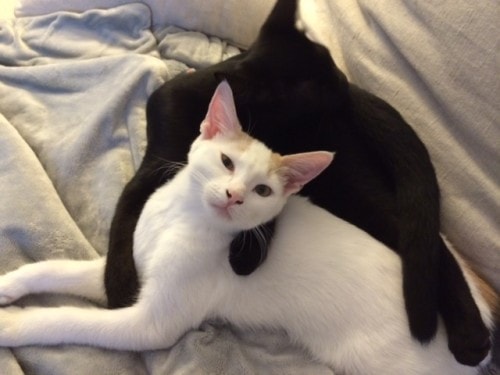 I knew this new feline character would be a small white cat with some brown splotches on her face and a brown bit on her tail. My daughter and son-in-law had just adopted their first two cats, Zuma and Bear. Both were adorable, but Zuma had such unusual markings–I began to imagine that Lorenzo’s new kitten would look exactly like her.

Obviously, if she chose Lorenzo as her person, she would be a special cat. So I needed just the right name. But I was stumped. Then I did what I often do when I’m stuck: I turned to my Facebook friends. They suggested dozens of names, like Patches, Pumpkin, Reaper, Pookie, Peaches, Sugar, Sweet Pea, Talulah, Butterscotch, Spot, Rose, Brulee, Dulce, Fortuna, Traction, Pilon, Hobie, Thomas Keller (after a chef…) You’ll notice a food theme in many of them.

Nothing seemed quite right. Lorenzo, being dramatic and artistic, would certainly sing to this cat. But what songs? Out of nowhere, I began imagining him crooning “la, la, la, Lola,” and “whatever Lola wants, Lola gets.”

So the little white cat is called Lola. And I’m thrilled to announce that this book starring Lorenzo and his Lola has been published this week. 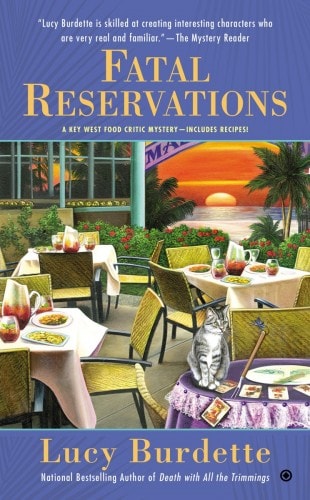 Hayley Snow looks forward to reviewing For Goodness’ Sake, a new floating restaurant that promises a fresh take on Japanese delicacies like flambeed grouper with locally sourced seaweed. But nearby land-based restaurateurs would rather see their buoyant competition sink. Sent to a city commission meeting to cover the controversy, Hayley witnesses another uproar. The quirky performers of the daily Sunset Celebration at Mallory Square are struggling to hold onto their performance space. And this fight has renewed old rivalries between Hayley’s Tarot-card reading friend Lorenzo and a flaming-fork-juggling nemesis, Bart Frontgate. Then Frontgate is found murdered. If Lorenzo could read his own cards, he might draw The Hanged Man. He can only hope that Hayley draws Justice as she tries to clear him of murder.

Lucy Burdette writes the Key West food critic mystery series. Fatal Reservations will be in bookstores on July 7. You can read more about the books on Lucy’s website, http://www.lucyburdette.com. You can also follow Lucy on Facebook and Twitter (@LucyBurdette.)

FTC Disclosure: This post contains Amazon Associate links. This means that if you purchase something by clicking through on one of these links, I will receive a small commission.