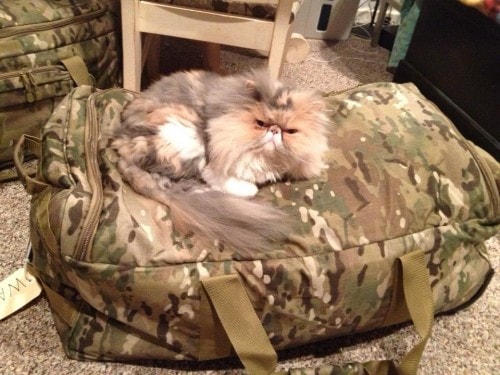 This Memorial Day, I featured a video showing the joyful reunion of two cats and their soldier mom after she returned from an overseas deployment (shown again at the end of this post.) Our military personnel make so many sacrifices when they deploy, and I’ve always felt that one of the biggest has to be leaving their beloved pets. Thankfully, there are organizations who assist members of the military in finding temporary foster care for their pets during deployments.

PACT for Animals helped Joy Warner, the soldier mom in the video, find a temporary foster placement for her two Persian rescue cats Herbie and Petunia while she deployed to Afghanistan for nine months. I had a chance to speak to Joy about her experience.

When Joy returned from a previous deployment to Iraq in 2009, she said “I’m done,” thinking she was going to leave the National Guard. She was happy that the time was finally right to get pets, and adopted Herbie, a buff-colored Persian. He was five years old at the time, and was found in a trashcan in a park. “He’s the sweetest cat you’ll ever meet,” said Joy. “I don’t know how anyone could have thrown this beautiful cat away.” Herbie, who Joy couldn’t even pet when she first adopted him, is now closely bonded to her and follows her everywhere. He likes to be close to Joy at all times.

Joy wanted to get a companion for Herbie, and fostered a number of cats, but “it never worked out,” she said. “Herbie was so laid back that every cat was beating him up.” The rescue she was working with suggested getting a kitten, and Joy adopted Petunia, also a rescue cat. “They’re getting along great,” she said. “They’re buddies.” 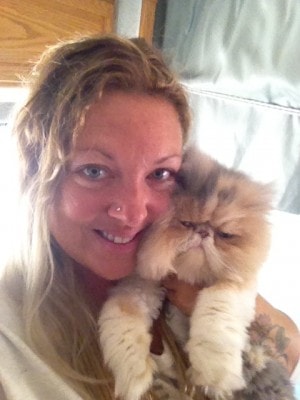 Despite her original plans to get out of the National Guard, Joy decided to stay. When she ended up deploying again, she needed to find someone to care for Herbie and Petunia. Because of how Herbie reacted to other cats in the past, she wanted to find a home without other cats. She came across PACT for Animals in a Google search. PACT connected her with Cindy, who had a dog, but no cats.

“I was really nervous,” said Joy. Joy felt better after meeting Cindy, but she was still apprehensive because of Herbie’s history. She didn’t need to worry – as soon as the cats arrived at Cindy’s home, Herbie made himself at home. “Cindy is so sweet,” said Joy, “He felt safe with her.”

Cindy emailed Joy frequently to let her know how the cats were doing, and sent pictures. “In the beginning, Cindy emailed me at least once a week,” said Joy. “After that, my email got kind of tricky, so it was more like once a month after that.” 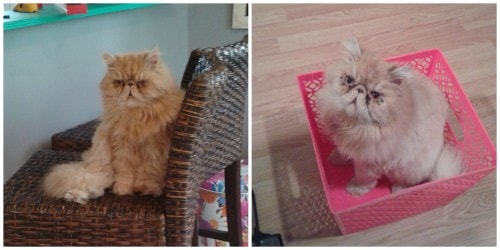 I asked Joy about what it was like to finally be reunited with Herbie and Petunia. “I was so excited, I almost cried all the way to Cindy’s house,” said Joy. “When I got there, they reacted exactly how you would expect cats to react: ‘Oh. You’re back. Hello. How are you?'”

Even though the reunion may be less flashy than some of the videos of dogs welcoming their soldiers home, I think the joy on Joy’s face more than makes up for any lack of visible enthusiasm on the cats’ part. And Herbie obviously was plenty excited about Joy’s return. “He slept on my head for a week, literally every night,” said Joy, “and I mean ON my head!”

Since her return, Joy has added an English Bulldog puppy to the family. Herbie loves Gus, but Petunia is a little scared of the new addition. “She’s fine,” said Joy, “she just doesn’t care to be around him.” Joy provided plenty of vertical space for Petunia so she can watch Gus from a safe distance. 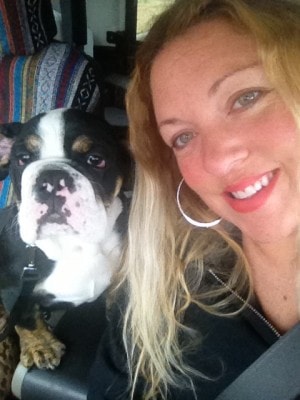 I asked Joy whether she had any advice for service members who are faced with having to leave their pets behind. “Trust PACT,” she said. “I had I had a tendency to want to control things,” she added. “I wanted to know months before I left where my cats were going.”  If she had to do it again, she would relax more and trust the process. “They paid close attention to my needs and to my cats’ needs,” she said.

Please visit the PACT for Animals website for more information. In addition to fostering pets for military personnel, PACT also coordinates foster care for pets for guardians who have to be hospitalized.