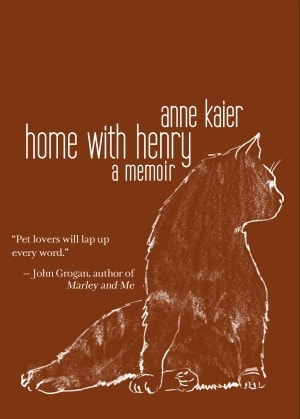 When Anne Kaier first saw a cat in the middle of the road, she thought he was dead, and just kept on driving. But after passing four or five houses, she pulled over, got out of the car, stopped traffic, and picked up the limp, but still warm cat. After a few days at a veterinary clinic, the cat, who Kaier had named Henry by then, was pronounced healthy, so she took him home to live with her and her 10-year-old cat Lucille.

Kaier set Henry up in a spare bedroom in her Philadelphia home. As soon as she let him out of his carrier, he panicked and started throwing himself against the only window in the room. Kaier was stunned. Even though Henry wasn’t the easiest patient at the veterinary clinic, the vet had pronounced him as “just scared. He’ll come around.” It turned out that Henry was not just a stray cat – he was feral. In Home with Henry, Kaier chronicles the first year of life with this challenging cat in a series of diary entries.

Anyone who has ever taken on the daunting task of trying to tame a feral cat knows what Kaier was up against. Unfortunately, or perhaps fortunately, Kaier did not. A self-admitted technophobe, she never even went online to try and find helpful information. I admire her patience and perseverance – and perhaps, in some ways, this was a case of ignorance being bliss, because most of the information she would have found would have told her that taming an adult feral cat is a very challenging undertaking. I found myself a little frustrated at times with some of the things she tried to bring Henry around when a simple Google search could have helped, but her approach ultimately worked as she was slowly building a relationship with the frightened cat. Along the way, Kaier’s sensitive, sometimes funny, often almost painfully honest narrative captured my heart.

This small volume is a story about a woman and her two cats, but it’s also a story of a single woman’s life in a busy city. As her relationship with Henry evolves, the reader learns about her family, her friends, and her neighborhood.

Ultimately, this is a story about how a cat can transform a life, and how love can be found in the most unlikely situations.

9 Comments on Review: Home with Henry by Anne Kaier