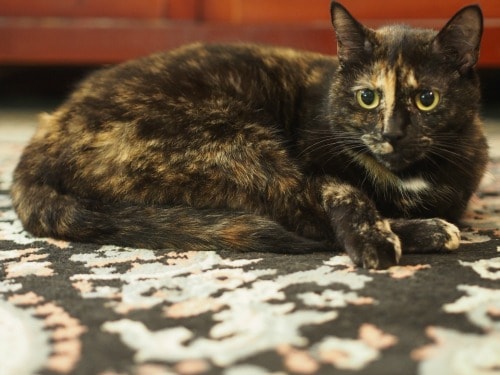 When Elizabeth Moore went to her local veterinary clinic to buy food for her cat Toby, she wasn’t planning on falling in love with a little tortie kitten. Little did she know that less than a year later, Lucy would save her life. Here is Lucy’s story, in Elizabeth’s own words.

I was aware of Lucy before we actually met. Our vet had rescued two litters of kittens and they were all playing in a large enclosure when I went to collect food for Toby,  our tuxedo cat. I first noticed a beautiful champagne tabby cavorting with her siblings. When I returned in two weeks, she and several other kittens had been claimed. The remaining fur balls rolled, played and stalked on.

It was several weeks before I returned. I had just heard on the news that a juvenile whale found in a waterway in the northern part of Sydney had been euthanized, and I was feeling sad and even a little teary. Without even thinking, I checked the enclosure and made eye contact with the last kitten. A loud trill came from this tiny tortie creature. It was clear to me that I was being summoned, so I took a closer look at the little lady who was demanding my attention. We had quite a conversation and I felt wretched that she was the last of the two litters. Her name was Lucy.

I was late for work but the germ of an idea was hovering. I mentioned Lucy to my husband and for once he said “Let’s talk about it when we get home.” In the past, he had always countered any kitten request from me in a kind but firm negative. Not this time. 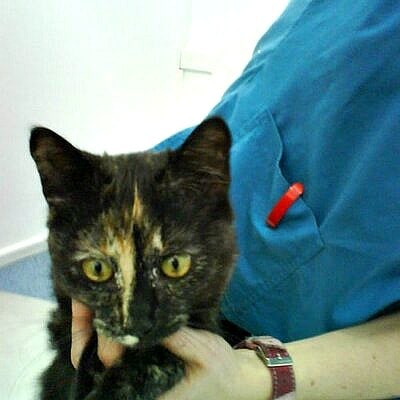 As soon as I finished work I drove straight back to the vet’s. I asked if I could meet Lucy. I was ushered into one of the exam rooms. A veterinary nurse brought Lucy, and the little girl made all the right moves for an adoption interview. She snuggled and purred and rubbed her head on my wrist. Meanwhile, the nurse was conducting her own, if somewhat covert, interview with me. She pointed out that Lucy was not really a tiny kitten anymore – she was a lanky 5-month-old and growing fast. I said I didn’t really want a kitten. I wanted a cat. Apparently, that was the right answer. “Besides” I added, remembering our exchange earlier in the day, “she is an amazing talker.” The nurse looked askance at me. “Lucy never talks.” I quickly asked about all the necessary adoption details and hurried home to convince my husband.

He was unusually amenable, and the next day, Lucy and I became an official item. She had spent all her time in a vet’s enclosure so I decided to start her off gently and gave her her own little room with all the basics: a bed, food, litter, water and toys. I would head in every half hour or so and sit on the floor with her while she sniffed, played and explored. That night my husband and I could hear what can only be described as cat Olympics as she bounced and jumped and skittered in her new, very own space.

Our next task was to introduce her to Toby. He was interested. Lucy put on her best firebrand impression and made much noise. Within minutes they were firm friends and remain inseparable to this day. 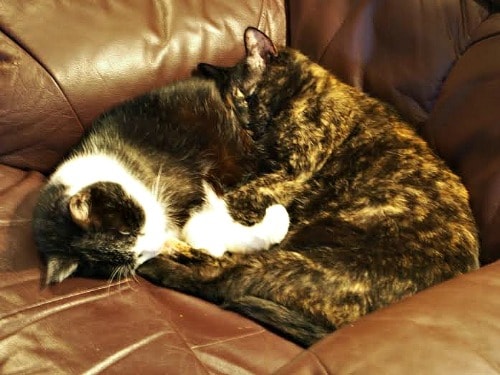 Lucy slipped seamlessly into our lives. She adored Toby, loved my husband, but was obviously my kitten. Each morning she would jump onto the bed accompanied by her lovely trilling calls. We would snuggle and then I was gently encouraged to start her day with food and litter duties. 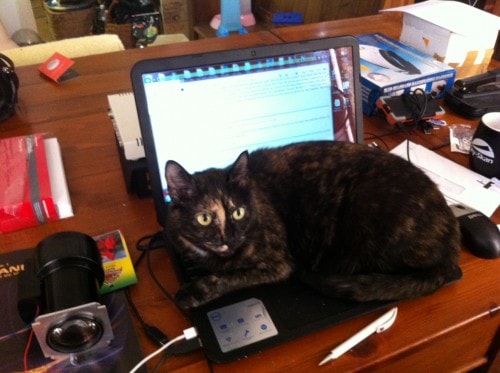 One morning, her snuggles varied a little. She leaned across me and pushed my left breast with her head. I moved her away as I was about to get up and attend to her breakfast. She repeated the behavior the next morning but this time she was much more insistent – annoying even. I reached across to stop her and as I moved her head I felt a lump. A lump that was not going away. A lump I should have found myself had I not been so haphazard in my own self breast examinations.

Everything changed in seconds. My doctor saw me without an appointment, I spent a day at the Sydney Breast Clinic confirming my fears and by the end of the week I was in surgery. I went through a series of surgeries, chemotherapy and radiation – I won’t go into detail. I spent months dutifully following every instruction I received, attending every appointment and downing every medication. Eight months later I was pronounced fit for work. Five years later the powers that be were tentatively pleased with my progress.

So – was it sheer happenstance? Dogs have been known to detect cancer – but cats? I know Lucy found my cancer. I really don’t care how she did it. I know she saved my life. At the very least, she hastened my diagnosis and treatment. 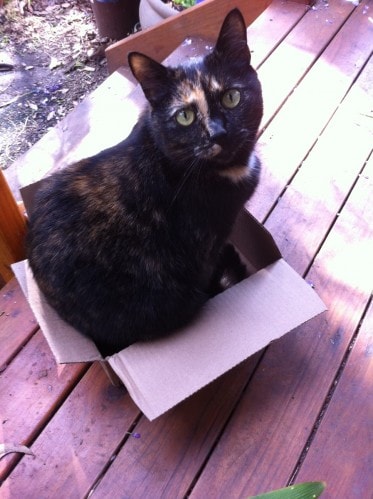 Lucy has tortitude by the bucket load. She loves my husband and me unconditionally. Occasionally, she loves my daughter. I have friends who do not believe Lucy lives in my house, because strangers are to be hidden from, yet supervision of the tradesmen working on our renovations is deemed necessary, albeit from a safe distance.

I knew very little about torties before I met Lucy. I know a lot more now and have become one of an elite group, enchanted tortie lovers. It’s an exclusive club – by invitation only – and I and so glad I was asked to join by one special little cat.

20 Comments on Tortie Detects Breast Cancer in Her Guardian