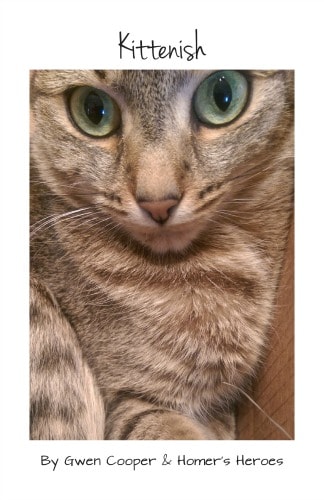 Like so many of us, Gwen Cooper watched the news coverage of the devastating earthquake that struck Nepal in April with horror. The quake killed more than 8,000 people and injured thousands more. Tens of thousands of survivors are homeless. Even though the news coverage focused primarily on human needs, any large scale disaster always affects animals.

In a country such as Nepal, whose economy relies heavily on agriculture, helping the animals is not only the humane thing to do, it will be critical to the country’s recovery. The quake did not just affect farm animals, it also affected cats and dogs. Some are stray, but many are beloved pets whose guardians may now be homeless, or who may have gotten lost. These animals need medical care, food and shelter.

Gwen created a fundraiser for Animal Nepal and raised over $13,000 in just under 24 hours. But she wanted to do more. She decided to create Kittenish, a crowd-sourced collection of cat selfies sending up Kim Kardashian’s bestselling Selfish. The 200-page book showcases hundreds of photos of cats taken by the cats themselves, submitted by cat guardians from around the world.

Gwen received more than 8,000 photos in just five days, and ended up including 403 cat selfies in the book. Choosing the photos for the book was quite a task. “All of the photo submissions were adorable.” says Gwen, “but many of them weren’t actual selfies–they were photos of cats that were pretty clearly taken by someone standing a couple of feet away from the cat.” Gwen also gave preference to rescue cats and adds “nearly all of the cats in KITTENISH are rescues.”

Kittenish retails for a suggested $3.99 in ebook format, and as a physical book for $23.99. Either version may be purchased at http://www.hihomer.com. 100% of the proceeds from KITTENISH will go to Humane Society International, to support their ongoing animal-rescue efforts in Nepal.