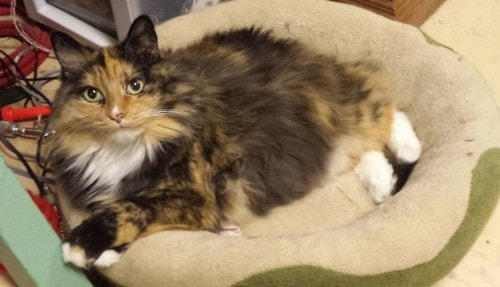 When Glen and Joan Bowley of Fort Erie, Ontario adopted 8-year-old tortoiseshell Gigi two years ago, they weren’t really looking for another cat, but when a friend forwarded an email mentioning a cat who needed a new home due to a death in her family, they couldn’t get the pictures of the beautiful ginger-faced long-haired cat out of their minds. Little did they know then that one day, Gigi would save their home from a fire.

“She looked so striking in those photos,” says Glen. “At first glance, she looks like a calico with a white chest, white feet and ginger face, but the rest of her coloring is pure tortoiseshell.” After thinking about it for a day or two, Joan and Glen agreed to meet Gigi at the home of a doggy day care owner. “When they brought her into the room with us, we were surprised how big she was,” says Glen. “We were also impressed with how calm, placid and friendly she was.” Gigi did not seem bothered by the one dog that was there, even though she was not used to dogs. 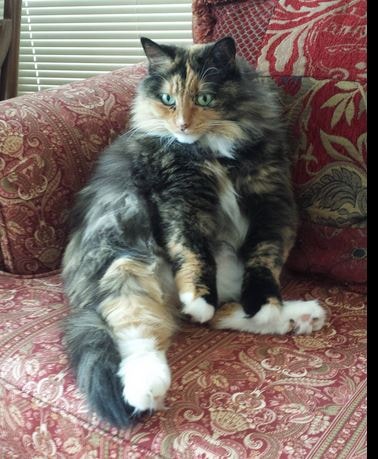 Glen and Joan took Gigi home the same day. They went through the recommended slow and gradual introduction with their two other cats and their Silky Terrier, but the process only took one day, which Glen attributes to Gigi’s calm temperament and her almost magical effect on the other animals. Even Kasey, Glen’s soul cat, a tortie he calls his “Warrior Queen” due to her dominant personality, accepted the newcomer readily. Sadly, Glen did not know at the time that he would lose Kasey three months later. “I may have rescued Gigi, but Gigi rescued me during that hard time,” says Glen. Glen fondly calls Gigi his “Empress.” 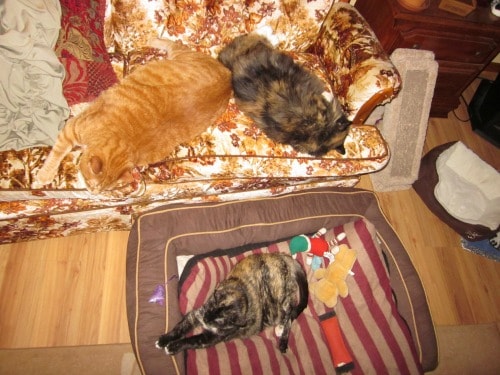 Gigi’s original family found her one cold February day when she was less than a year old. She was outside, hiding under a discarded couch. She had recently had a litter of kittens, but they died from the severe cold. They took her in and nursed her back to health. Glen is sure she had a very good life with them, until her original family suffered their own tragedy.

Gigi to the rescue

Last week, Joan, who runs a business out of their home, was preoccupied, working on her computer. Gigi came to see her, which she often does. She’s a social cat who loves company. However, that day, she was behaving in a way that was unusual for her: she seemed upset, and was insistent on getting attention.

When Joan got up, Gigi took off for the kitchen. Joan followed her. There, on the electric stove burner, was a stainless steel kettle that had been forgotten and boiled dry. The burner was on the verge of turning red. “It was a lucky break that the Empress had become agitated,” says Glen.

Even after Joan turned off the burner and removed the kettle, Gigi stayed in the kitchen for a while, looking at the stove. “I guess she wanted to make sure all was well,” says Glen.

Joan called Glen at work to tell him just how smart Gigi was.

“We are very glad we took a chance and brought the “ginger-faced” tortie home,” says Glen.